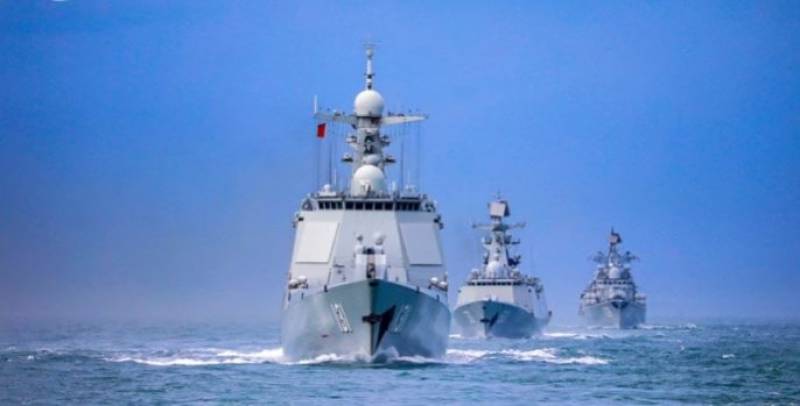 In the Yellow Sea, Type 056 and Type 056A corvettes Wuhai, Datong and Yingkou formed a flotilla and practiced training courses including main gun shooting, secondary gun shooting and air defense by launching flares. In the East China Sea, Type 052C destroyer Jinan and Type 054A frigate Changzhou ran more than 10 training missions including free combat among warships, submarines and warplanes, and joint fire strikes. In the South China Sea, different types of tug and support ships held maritime search and rescue and emergency towing exercises, according to the CCTV report.

The PLA Southern Theater Command also paid tribute to heroes of in the Chigua Reef Skirmish on March 14, 1988 against Vietnam by holding another exercise in the Beibu Bay, west of the Leizhou Peninsula in the South China Sea.

The intensive PLA naval exercises were organized at a time when US Defense Secretary Lloyd Austin Saturday kicked off Asia visit to hold key meetings with allies in Tokyo, New Delhi and Seoul.

Austin in a tweet before the visit said, “As @SecBlinken and I travel to Asia tomorrow, we wanted to share thoughts on why this trip- and diplomacy- are so important. Of note, I view China as our pacing threat, and it’s critical we work with our Indo-Pacific partners to address the China challenge”.

A Beijing based military expert told the Global Times that the PLA must be ready to protect country’s sovereignty and other interests amid prevailing security circumstance.

Director of the think tank Hu Bo told the media organization that that the US will likely continue its efforts to interfere in regional affairs and enhance military presence in order to contain China.