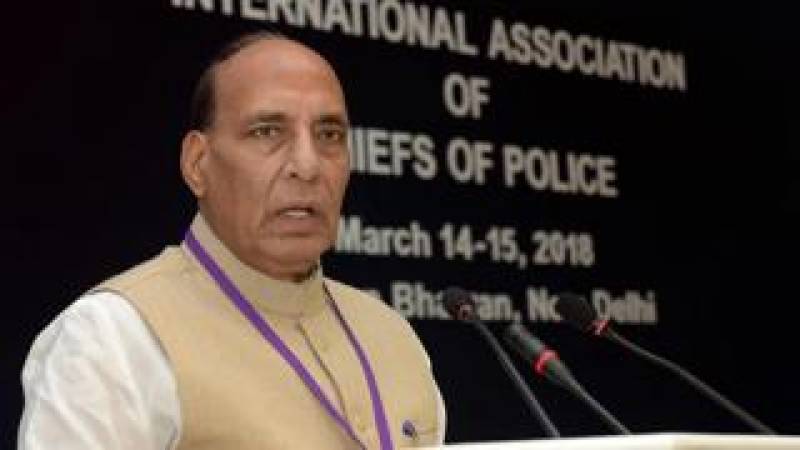 NEW DELHI - Indian Union home minister Rajnath Singh on Saturday said no power in the world can take Kashmir away from India and if need be forces can cross border to protect the country’s territorial integrity.

“Kashmir is, was and will be ours always. No one can take it from us,” Rajnath Singh said, addressing the CNN News18 Rising India Summit.

He praised the Indian Army for its valour to secure the country and warned Pakistan, saying “we not only secure India within but can also cross the border to protect the country, if needed. No one should take it otherwise.”

“Now the US is condemning Pakistan. I don’t know what happened to Pakistan. We want good relations with Pakistan but it has refused to accept our offer of friendship.

“Pakistan is giving legitimacy to UN-designated terrorist Hafiz Saeed who is establishing a political party there and wants to contest in elections.”

The minister said the government was keen on finding a permanent solution to the Kashmir problem and was open to speak to anyone.

To resolve the Kashmir issue, Rajnath Singh said, the government-appointed interlocutor Dineshwar Sharma, a former Intelligence Bureau chief, is moving forward and has invited people from all sections for talks.

He said Kashmir’s children were like his own and would not allow anyone brainwash them into radicalisation.

“I want to tell those who are trying to teach jihad to innocent Kashmiri youths that they should first learn the real concept of jihad in Islam.”

The minister said he had personally asked Jammu and Kashmir chief minister Mehbooba Mufti to ignore cases filed against the first-time stone-pelters.

Earlier in 2018, the Jammu and Kashmir government withdrew cases registered against 9,730 people involved in stone-pelting incidents, including first-time offenders.

“We have forgiven first-time stone-pelters. They might have been influenced by others. They are young. We need to give them a second chance,” he said.

The home minister said the government never differentiated between the children in Kashmir and those in the other parts of the country.

On the issue of terrorism, he said Prime Minister Narendra Modi has succeeded in getting global consensus and managed to bring the international community on board. - Agencies