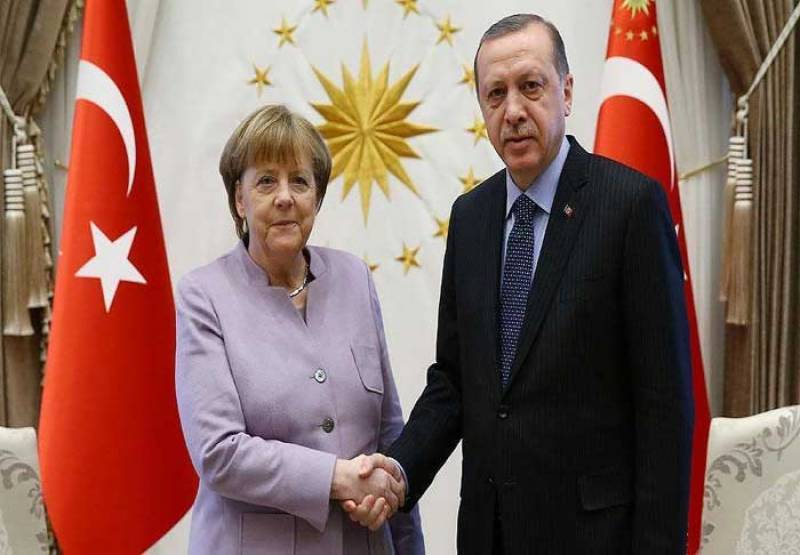 President Recep Tayyip Erdogan and German Chancellor Angela Merkel on Thursday spoke over the phone to discuss bilateral and Turkey-EU relations, and regional issues, according to diplomatic sources.

During the conversation, Erdogan congratulated Merkel for being re-elected to a fourth term as Germany's chancellor.

The two leaders reiterated their commitment to accelerate dialogue and cooperation.

They vowed to collaborate in the fight against illegal migration and on refugee issues.

The leaders stressed on joint cooperation in the fight against terrorism.

Erdogan and Merkel also emphasized the significance of a key EU-Turkey summit set for March 26 in Varna, Bulgaria.

According to a senior EU official, EU-Turkey relations, regional and international issues, including global foreign policy, security, fight against terrorism, the Middle East, Africa and Russia are expected to be discussed during the summit.

According to the Turkish General Staff, the operation aims to establish security and stability along Turkey’s borders and the region as well as to protect Syrians from terrorist oppression and cruelty.

The operation is being carried out under the framework of Turkey's rights based on international law, UN Security Council resolutions, its self-defense rights under the UN charter, and respect for Syria's territorial integrity, it said.

The military also said only terror targets are being destroyed and that "utmost care" is being taken to avoid harming civilians. Anadolu Agency