Asian Cold War: US using India against China, as It did to Pakistan against Russia
17 Mar, 2018 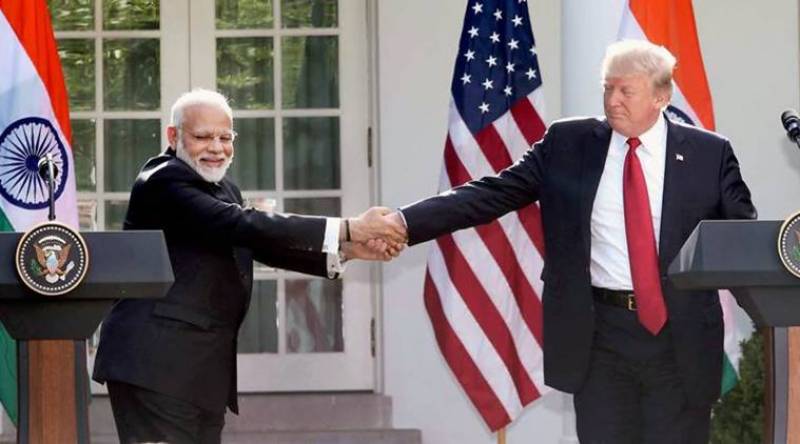 It was a cold war era and today again it's a new cold war era. India has become an arms dumping ground for US. Containing China is as important as was containing Russia through Pakistan.

India is the "biggest strategic opportunity" for the US with New Delhi showing more openness to strengthen bilateral security ties, a top Pentagon commander has said, underlining a mutual desire for global stability and support for the rules-based international order, PTI has reported.

Admiral Harry Harris told Senate Armed Services committee, that the Quad, comprising India, US, Japan and Australia - is an important idea of like-minded nations that can go after the challenges in the Indo Pacific region.

In his prepared testimony, Harris said the US and India are natural partners on a range of political, economic, and security issues.

"I think India is the biggest strategic opportunity for the US. We share democratic values, we share the same concerns, and we operate more frequently in the Indo-Pacific region together," Harris said.

He said with a mutual desire for global stability and support for the rules-based international order, the US and India have an increasing convergence of interests, including maritime security and domain awareness, counter-piracy, counter-terrorism, humanitarian assistance and coordinated responses to natural disasters and transnational threats.

Noting that India will be among the US' most significant partners in the years to come due to its growing influence and expanding military, Harris said as a new generation of political leaders emerge, India has shown that it is more open to strengthening security ties with the US and adjusting its historic policy of non-alignment to address common strategic interests.

The US has been sending its navy warships in the disputed South China Sea as part of its "freedom of navigation" operation, which evoked strong protests from China .

Harris said the US seeks an enduring, regular, routine and institutionalised strategic partnership with India and the Pacific Command identifies a security relationship with India as a major command line-of-effort.

Over the past year, US and Indian militaries participated together in three major exercises, executed more than 50 other military exchanges, and operationalized the 2016 Logistics Exchange Memorandum of Agreement (LEMOA).

The Pacific Command, he said, will sustain the momentum of the strategic relationship generated by the President-Prime Minister-level meeting and the emerging 2+2 Ministerial Dialogue through strengthening their military-to-military relationship and working toward additional enabling agreements to enhance interoperability.

"At the moment, India is considering a number of US systems for purchase, all of which Pacific Command fully supports: the F-16 for India's large single-engine, multi-role fighter acquisition program; the F/A-18E for India's multi-engine, carried-based fighter purchase; a reorder of 12-15 P-8Is; a potential purchase of SeaGuardian UAS; MH-60R multi-role sea-based helicopter; and F-35 Joint Strike Fighter," Harris said.

Responding to a question on Quad from Senator Tim Kaine, who was the 2016 Democratic vice-presidential nominee, he said "I think the Quad is an important construct of like-minded nations that can go after the challenges that are in the Indo-Pacific region. So that's Japan, the United States, Australia, and India...The Quad is an idea. It's not rigid. It is not exclusive."