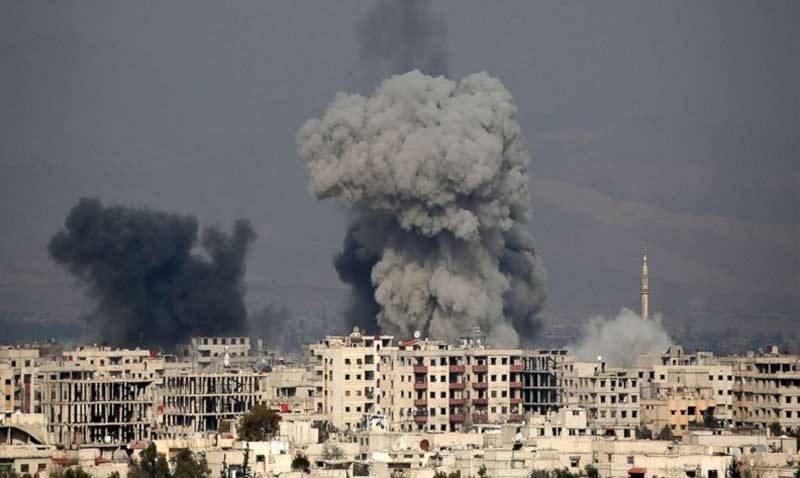 BEIRUT: A Syrian monitoring group says more than 100 civilians have been killed in government, Russian, and Turkish airstrikes and shelling on towns inside Syria.

The Britain-based Syrian Observatory for Human Rights says government and Russian forces have been bombing rebel-towns areas outside Damascus throughout Friday, killing 64 people in Kafr Batna and another 12 in Saqba.

The Syrian government is determined to seize Kafr Batna, Saqba, and the rest of the besieged eastern Ghouta region from rebels, after 7 years of war.

The Observatory says Turkish shelling and airstrikes have killed another 27 people in the Kurdish-held town of Afrin, in north Syria.

Turkey is waging a war on a Syrian Kurdish militia that controls Afrin and the surrounding region.

According to the BBC, As many as 50,000 people have fled separate offensives against rebel forces in northern and southern Syria in recent days, activists say.

Russian air strikes reportedly killed 31 people in the Eastern Ghouta outside Damascus on Friday, after 20,000 people left the region.

In the northern town of Afrin, where 30,000 people have fled, Turkish shelling killed at least 18 people.

Seven years of war have driven nearly 12 million Syrians from their homes.

At least 6.1 million are internally displaced while another 5.6 million have fled abroad.

More than 400,000 are believed to have been killed or are missing, presumed dead, since the uprising against President Bashar al-Assad began in March 2011.

The foreign ministers of Turkey, Russia and Iran - three countries closely involved in the conflict - have met in the Kazakh capital Astana to prepare for a summit on Syria in Istanbul next month.

BEIRUT (Reuters) - A Hezbollah military media unit said the Syrian army captured the town of Jisreen on Friday in an insurgent pocket in eastern Ghouta where thousands of people have fled since Thursday.

“The Syrian army is continuing its operations in eastern Ghouta and gained control of Jisreen town,” said the unit run by Lebanon’s Hezbollah, which fights alongside the army in Syria.

Thousands of civilians were fleeing from besieged enclaves on opposite ends of Syria on Friday as two major battles in the multi-sided war entered decisive phases. APP/AFP