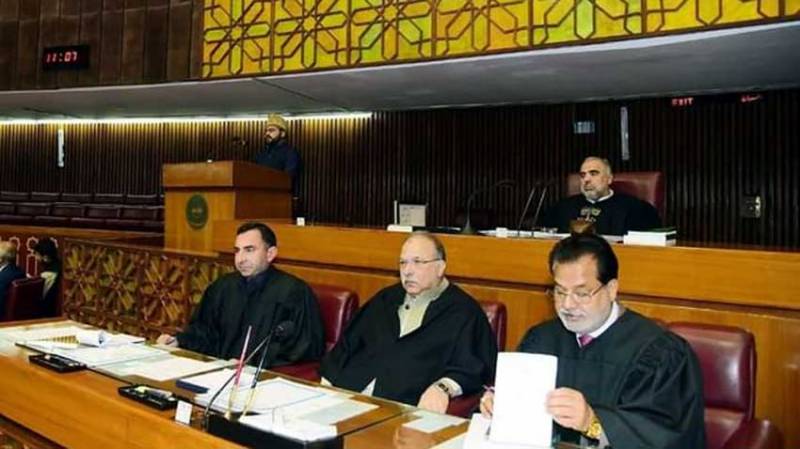 National Assembly began its session at the parliament house in Islamabad today (Tuesday) with Speaker Asad Qaiser in the chair.

Taking floor in the Assembly, Minister of State for Parliamentary Affairs Ali Muhammad Khan said we should be loyal to our country, rather than political leaders.

He said production orders of any member of assembly can be issued for allowing them to raise the issues of their constituency, not forwarding their personal issues at the floor of the House.

He accused the treasury benches of creating an atmosphere of tension in the parliament rather than holding discussions on issues of public importance.

Raja Pervez Ashraf said production order is prerogative of every member of national assembly irrespective of his political affiliation.

Referring to Reko Diq and similar cases of international arbitration, Raja Pervez Ashraf said the commission set up by the Prime Minister should probe the roles of all those involved in this affair.

Minister of State for Saffron Shehryar Khan Afridi said no one is above the law and the operations of ANF are conducted without any discrimination.

He said the government of PTI firmly believes in upholding of justice and equality.

He said on the basis of credible intelligence received, the movement of MNA Rana Sanaullah was monitored for three weeks and he was apprehended with cache of drugs.

He said as Rana Sanaullah was caught red handed, there was no need for seeking additional remand for him.

The State Minister said no compromise will be made with those who are involved in drug trafficking.

Shehryar Khan Afridi said 2900 personnel of Anti-Narcotics Force are playing a key role in eradicating the menace of drug from society.

He said the force is understaffed and lacks necessary resources and modern technology. Despite this, he said, drugs worth billions of dollars are confiscated each year by the ANF and the conviction rate of the agency is 98%.

Ahsan Iqbal of PML-N said not issuing production orders of the members of parliament will set a dangerous precedent.

He said a person is innocent unless proven guilty and has the right to participate in the parliamentary session like his other rights.

He demanded the Speaker to issue production order for arrested MNA Rana Sanuallah, among others.

Speaking in the House, MNA Makhdoom Zain Hussain Qureshi said Pakistan has been a frontline state in war against terrorism and security forces of Pakistan have rendered huge sacrifices to make the country and world peaceful and safe.