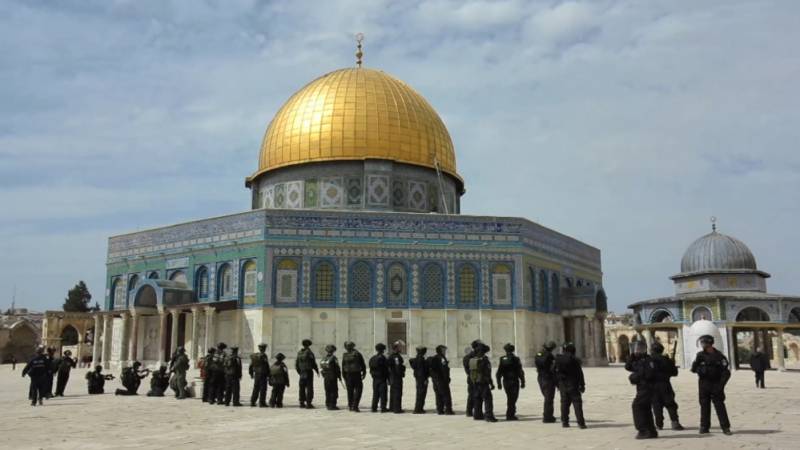 JERUSALEM: Israel reopened an ultra-sensitive holy site Sunday closed after an attack that killed two policemen, but Muslim worshippers were refusing to enter due to new security measures including metal detectors and cameras.

The flashpoint holy site includes the Al-Aqsa mosque and the Dome of the Rock.

Calls to prayer rang out from Al-Aqsa, but dozens of Muslim worshipers held midday prayers outside the site in protest at the new security measures.

Around 150 people gathered outside for prayers later in the afternoon. Police said some 200 people entered the compound.

“We will not enter through these metal detectors.”

Some women wailed and cried while telling people not to enter.

Waheeb Liftawi, 52, prayed inside Al-Aqsa at midday without knowing of the calls to remain outside. During prayers later in the afternoon, he prayed outside.

“These things should not be put in front of a place of worship, a mosque,” he said.

“This is why we refuse this or this will become the status quo.”

Later in the day, a funeral procession sought to enter with a coffin but was not allowed through.

Three Arab Israeli assailants opened fire on Israeli police Friday in Jerusalem’s Old City before fleeing to the compound, where they were shot dead by security forces.

Israeli authorities said the gunmen had come from the flashpoint holy site to carry out the attack.

It was one of the most serious incidents in Jerusalem in recent years.

The site remained closed on Saturday, while parts of Jerusalem’s Old City were also under lock down.

Israeli authorities said the closure was necessary to carry out security checks and announced they would reopen the compound Sunday.

Police said Sunday that so far two gates leading to the holy site had been opened, equipped with metal detectors.

Israeli Prime Minister Benjamin Netanyahu spoke of the security measures late Saturday before departing for a trip to Paris.

“This evening I held a discussion with the top security leadership and I instructed that metal detectors be placed at the entrance gates to the Temple Mount,” he said.

“We will also install security cameras on poles outside the Temple Mount but which give almost complete control over what goes on there.”

Abdullah condemned the attack, but also called on Netanyahu to reopen the Al-Aqsa compound and stressed the need to “avoid any escalation at the site”. Palestinian president Mahmud Abbas conveyed a similar message to Netanyahu when the two spoke by phone on Friday as tensions rose in the wake of the attack.

Proposals to change security measures at the compound have sparked controversy in the past.

A plan developed in 2015 between Israel and Jordan to install cameras at the site itself fell apart amid disagreement over how they would be operated.

The Haram al-Sharif/Temple Mount is central to the Israeli-Palestinian conflict, with Palestinians fearing Israel may one day seek to assert further control over it.

It is located in east Jerusalem, occupied by Israel in 1967 and later annexed in a move never recognised by the international community.

It is considered the third holiest site in Islam and the most sacred for Jews. Jews are allowed to visit but not pray there to avoid provoking tensions.