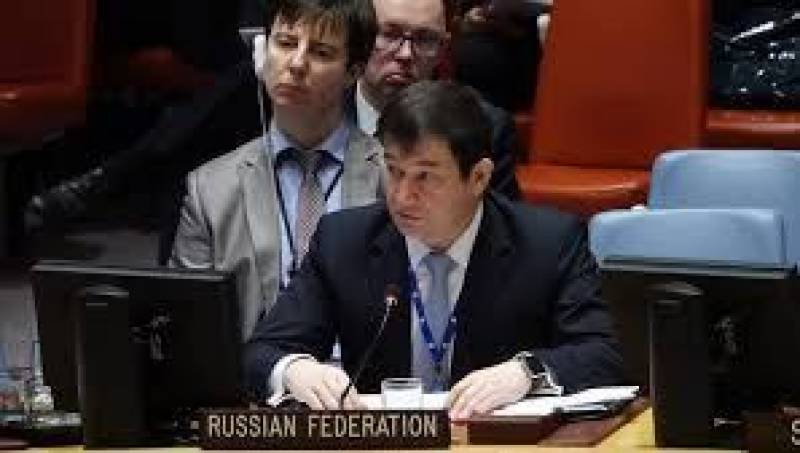 NEW YORK: Russian envoy statement on Occupied Kashmir after UNSC meet may irk India as Russian Deputy Representative at UN termed it a dispute to be settled bilaterally with Pakistan against Indian stance of unilateral move.

Russia’s Deputy Permanent Representative to the United Nations Dmitry Polyanski has said that Moscow will continue its efforts to promote normalization of ties between the Pakistan and India.

In a series of posts on Twitter, the Russian envoy said, his country hopes that the existing divergences around Kashmir will be settled bilaterally by political and diplomatic means between the nuclear states.

He added that “Russia continues to consistently promote normalization of India-Pakistan ties.”

Russian envoy added “We hope that existing divergences around Kasmir will be settled bilaterally by political and diplomatic means only on the basis of Simla Agreement of 1972 and Lahore declaration of 1999, in accordance with UN Charter, relevant UN resolutions and bilateral agreements between India and Pakistan”.

Polyanski further said Russia is friends and good partners with both India and Pakistan and both peoples. “We have no hidden agendas. So we will open-heartedly continue to engage with Islamabad and New Delhi in order to help both of them come to terms and have good neighborly relations Kashmir,” he added.

The Russian envoy’s tweets came after UN Security Council’s meeting on Friday which was called to discuss the critical situation in Indian occupied Kashmir.

The UNSC met behind closed doors at the request of China and Pakistan discussed the Indian government’s recent decision to revoke the special status of occupied Kashmir.

The council had taken up the issue of the critical situation in Indian Occupied Kashmir after more than 50 years since it was last discussed on the platform, effectively rejecting India’s stance that occupied Kashmir was an internal issue and not an internationally recognised dispute.