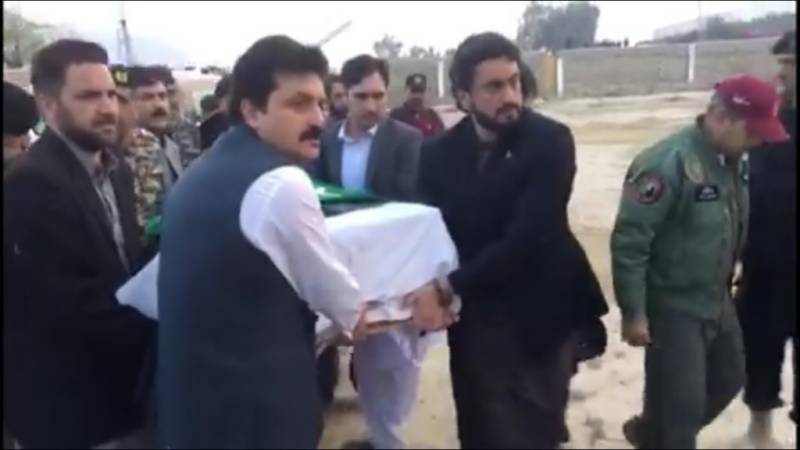 The dead body of the martyred Superintendent Police Peshawar Tahir Khan Dawar was handed over to a Pakistani delegation on Pakistan-Afghan Border at Tourkham on Thursday evening.

Minister of State for Interior Shahryar Khan Afridi and Khyber Pakhtunkhwa Minister for Information Shaukat Yousafzai were present at Torkham to receive the dead body of Tahir Dawar.

Mohsin Dawar and other people were also present on the occasion.

Slain SP's dead body is being brought to Peshawar by helicopter. The funeral prayers of Tahir Dawar will be offered at Police Lines in Peshawar.

Tahir Khan Dawar was kidnapped by some unknown persons in Islamabad on 26th of last month.

His dead body was recovered in Nangarhar province of Afghanistan the day before yesterday.

Minister of State for Interior Shehriyar Khan Afridi has regretted the attitude of Afghan government in handing over the dead body of Tahir Khan Dawar.

Addressing a news conference in Peshawar this evening, he said Pakistani delegation waited for two and a half hours at Tourkham Gate as the Afghan authorities were not ready to hand over the dead body of Tahir Khan Dawar.

He said the Afghan government was also reluctant to hand over the dead body to Pakistani Consul General in Jalalabad.

He said Pakistan has always supported Afghanistan and its people and will do so in the future.

The Minister of State said the Prime Minister has directed for conducting an inquiry into the martyrdom of Tahir Khan Dawar.

He said a meeting will be held in this regard in Islamabad at 03:00 pm tomorrow

He said the issue relating to martyrdom of Tahir Khan Dawar will be taken to its logical conclusion.

Shehriyar Khan Afridi made it clear that no compromise will be made on security of Pakistani citizens and personnel of law enforcing agencies.

The Khyber Pakhtunkhwa Minister for Information Shaukat Yousafzai who was also present on the occasion said that the purpose behind delay in handing over the dead body of the martyr was to create chaos in the country which is condemnable.

Speaking on the occasion, younger brother of the Tahir Khan Dawar said that he is proud of the sacrifice of his brother for the nation. He demanded that investigation relating to the martyrdom of his brother should be taken to its logical end.