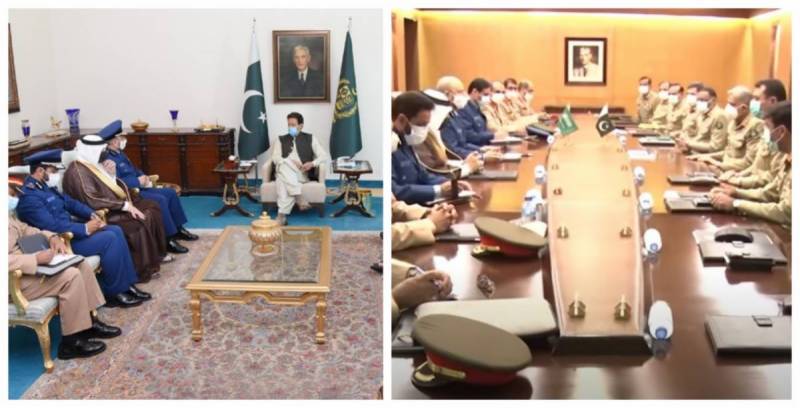 The premier welcomed the delegation and conveyed his warm regards to King Salman Bin Abdulaziz Al Saud and Crown Prince Mohammed bin Salman. He added that the people of Pakistan always accorded special reverence to the Saudi leadership

Reaffirming the close fraternal ties between the two countries, Prime Minister Imran Khan underscored Pakistan’s commitment and support for the sovereignty and territorial integrity of the Kingdom of Saudi Arabia.

During the meeting, views were exchanged on a range of important issues of common interest. The Prime Minister underlined the importance attached by Pakistan to further deepening and broadening mutual cooperation and strengthening people-to-people linkages with the Kingdom.

He hoped that the recently established Saudi-Pakistan Supreme Coordination Council (SPSCC) would play a catalytic role in fostering enhanced bilateral cooperation in all fields.

The Prime Minister expressed satisfaction at the robust defence relationship between the two countries, and hoped that bilateral defence cooperation will grow further in the years ahead.

During the meeting, the latest situation in Yemen was also discussed.

The Prime Minister expressed Pakistan’s support for resolving the conflict in Yemen through dialogue and diplomacy, and appreciated Saudi efforts in this regard.

Pakistan and Saudi Arabia have long-standing and historic fraternal relations, rooted deep in common faith, shared history and mutual support. Regular and high level exchange of visits is a reflection of excellent relations between the two countries.

During the meeting with army chief, geo-strategic environment, security situation in Afghanistan and matters of mutual interest were discussed including bilateral defence cooperation and Training Exchange Programme. In view of the evolving regional security situation, Saudi CGS expressed full support for Pakistan’s efforts for peace in the region.

The dignitary acknowledged Pakistan Army’s achievements in war against terrorism and contributions for regional peace and stability. Saudi CGS thanked Pakistan Army for its sustained assistance in training of Saudi Armed Forces and expressed his desire to enhance bilateral defence collaboration.