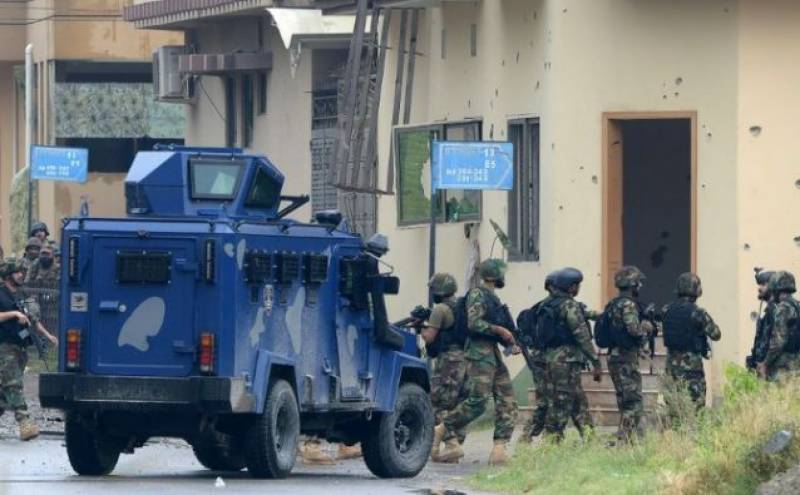 PESHAWAR - An entire three-storey building was blown apart Tuesday as Pakistani security forces detonated a huge amount of explosives hidden inside, after a bloody, hours-long gun battle with militants holed up in a crowded city.

Video footage by an AFP reporter at the scene shows the building collapsing in the blast, with a cloud of dust and debris rising from the fallen structure.

Officials said the militants -- who have not yet been identified -- had used the building, in a residential area in the northwestern provincial capital of Peshawar as a hideout.

Shafqat Malik, chief of Peshawar's bomb disposal squad, told AFP the militants had planted a motorcycle bomb at the gate of the building, and linked it to more than 50 kilogrammes of explosives throughout the structure.

Officers from the bomb disposal squad carried out a controlled detonation of the motorcycle device, Malik said, triggering the explosives inside and bringing the building crashing down.

The blast came after security forces had fought the militants for 17 hours, authorities said. In the moments before the explosion in the video footage, bullet holes can be seen across the building's facade.

"During exchange of fire, five terrorists have been killed," the Pakistan military said in a statement, adding that one police officer was also killed.

He said the fight began late Monday and continued overnight, and added that investigators were working to identify the militants.

Neither the military nor Peshawar police named which of the myriad militant groups operating in Pakistan that the fighters belonged to.

Islamabad has fought a long battle with Islamist militancy, with tens of thousands of people believed killed. Peshawar, near the Afghan border, was for years at the centre of much of the violence.

But security across the country, including in Peshawar, has dramatically improved since a government and military crackdown in recent years.

Analysts warn, however, that Pakistan has yet to tackle the root causes of extremism. - APP/AFP