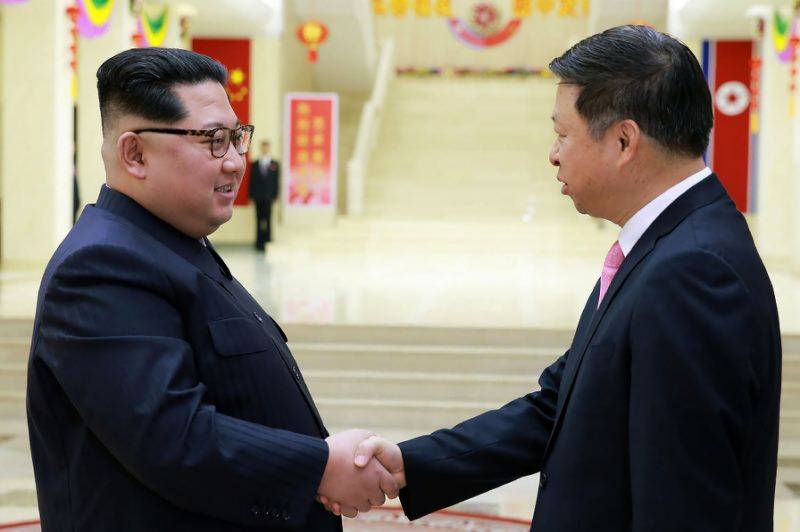 Kim met Song Tao, head of the Chinese Communist Party Central Committee's international department, who was leading an art troupe to a spring festival in the North's capital.

The delegation arrived just weeks after Kim made a surprise visit to Beijing and met Chinese President Xi Jinping, signalling an attempt by both leaders to shore up a key alliance ahead of a period of high-stakes diplomacy.

Kim is expected to hold summits with South Korean President Moon Jae-in this month and US President Donald Trump in the following weeks.

The North's official KCNA news agency said Kim welcomed Song and his delegation in a meeting on Saturday at which Song conveyed Xi's "warm greetings".

The two exchanged "profound views on the important matters of mutual concern" and the international situation, KCNA said, without providing details.

"The Supreme Leader said that he would positively carry forward and develop the traditional DPRK-China friendship into a fresh phase of development as required by a new era," it added, using the North's official acronym.

On his trip to Beijing, Kim had "witnessed the remarkable achievement made by China" and "was happy for the brotherly Chinese people", the official Chinese Xinhua news agency quoted him as saying.

Kim also said he wanted to "strengthen exchanges and cooperation" with China, according to Xinhua.

In response, Song told Kim that it was Beijing's "unswerving policy... to preserve, consolidate, and develop relations" with the North, it added.

Beijing is North Korea's sole major ally, an alliance dating back to the 1950-1953 Korean War, but relations deteriorated after China supported United Nations sanctions to punish Pyongyang over its nuclear weapons programme.

Kim also hosted a banquet for the Chinese delegation, in which officials from the two sides toasted to their shared will "to more beautifully decorate the flower garden of the DPRK-China friendship", according to KCNA.

Photos carried by the official Rodong Sinmun newspaper showed Chinese and North Korean officials in a massive banqueting hall with a mural of Kim and Xi shaking hands decorating one wall.

Another photo showed a North Korean orchestra performing with a large picture of Xi projected in the background.

Song is leading a Chinese art troupe attending a spring art festival held as part of the commemorations for the anniversary of the birth of the North's founder Kim Il Sung on April 15, 1912.

KCNA also issued a rare separate report on Kim's wife, who attended a performance by the Chinese art troupe on Saturday in the absence of her husband.

Pyongyang's frenetic diplomatic activity marks a stunning turnaround after a year of high tensions which saw the North carry out nuclear and missile tests, further isolating the regime and triggering a fiery war of words with Trump.

Kim sent a high-profile delegation to the Winter Olympics in the South in February, setting off a flurry of cross-border exchanges of athletes, cheerleaders and officials.

In the latest such exchanges, officials from the two Koreas met Saturday at the North's side of the Demilitarized Zone to discuss setting up a hotline between their leaders, Seoul's presidential office said Sunday.

The two sides will hold another working-level meeting on Wednesday to agree on protocol, security measures and media coverage of the April 27 summit. APP/AFP