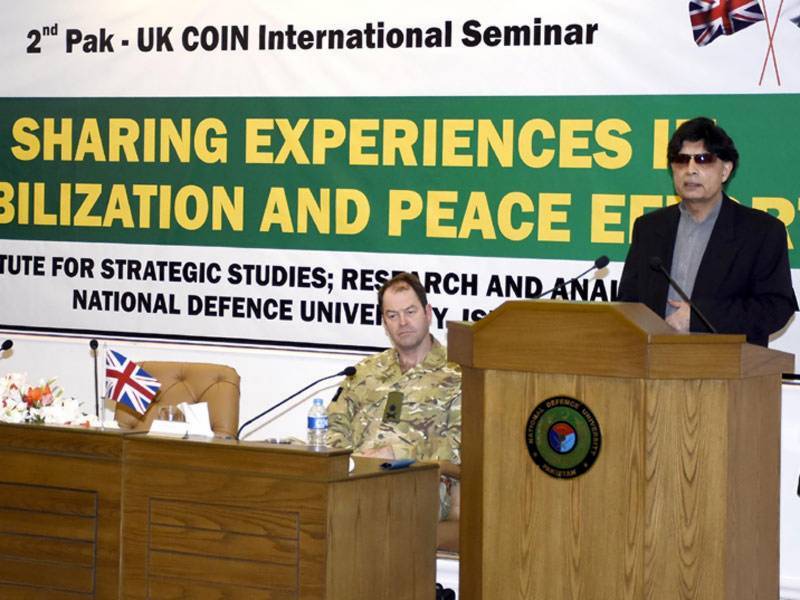 He was addresses a two-day Pakistan-UK International Seminar on "sharing experience in stabilization and peace efforts" in Islamabad on Wednesday.

The Minister said certain countries have taken upon themselves to blame Pakistan for everything, even for their own weaknesses.

He said Pakistan has achieved huge successes in Operation Zarb-e-Azb and terrorism graph have witnessed a clear decline.

He said military solutions by themselves cannot resolve administrative or political issues. He said the the option of dialogue was exhausted before launching Operation Zarb-e-Azb.

The Minister said that the international community must differentiate between the freedom movements and terrorism and it come out of the Islamophobia and avoid linking terrorism with Islam.

He said that Islam is the religion of 1.2 billion people across the worls, who are the worst sufferers of the scourge of terrorism.

Chaudhry Nisar Ali Khan said Pakistan faced the brunt of regional security discrepancies for past many decades, but it was abandoned by international community to face consequences, single-handedly, of post conflict situations, may that be soviet invasion of Afghanistan or US action in 2001.

He said Pakistan played the role of frontline state in counter-terrorism fight, but only received verbal support from international community.

He said for winning any war, there should be unity across the board. He said successes that Pakistan has achieved during last three and half years was the result of better coordination between civil-military leadership and support from all segments of society.

He said valiant struggle and sacrifices of our armed forces, police, civil armed forces, backed by the nation, has resulted in sharp decline of terrorism in Pakistan.