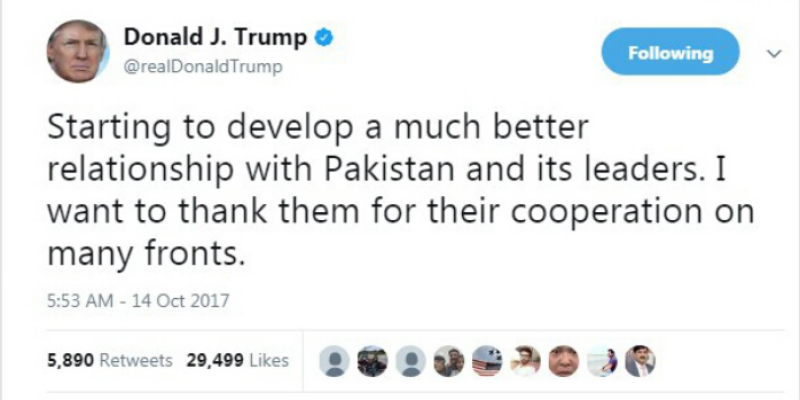 WASHINGTON: The United States has said that it will not forget the assistance Pakistan provided in rescuing a North American couple from the clutches of the Haqqani network.

“I want to be clear on saying how grateful we are to the government of Pakistan. Without their assistance, this would not have been made possible,” said US State Department’s spokesperson Heather Nauert. “It was critical, and we will certainly not forget that.”

In a separate statement, the White House said the Haqqani network had captured Caitlan Coleman, an American citizen, and her husband, Joshua Boyle, a Canadian, from a mountain near Kabul in 2012 and kept them in custody for five years.

At a Thursday afternoon news briefing at the State Department, Ms Nauert also spoke about relations between the US and Pakistan which, until recently, were close allies in the war against terrorism. Their relations began to strain after a US raid on Osama bin Laden’s hideout in 2011 and deteriorated further after President Trump’s Aug 21 speech in which he announced the new US strategy for South Asia.

“Our overall relationship with Pakistan …We’ve certainly had points where that relationship has had some challenges. That relationship isn’t going to just turn around overnight, but this is a terrific step in the right direction,” said Ms Nauert while explaining the current status of Washington’s relations with Islamabad.

Responding to a question about Pakistan’s role in the rescue operation, she said: “The Pakistani military, acting on information that we provided, were able to secure the release of this family. We are tremendously happy to have these folks returning, coming home.”