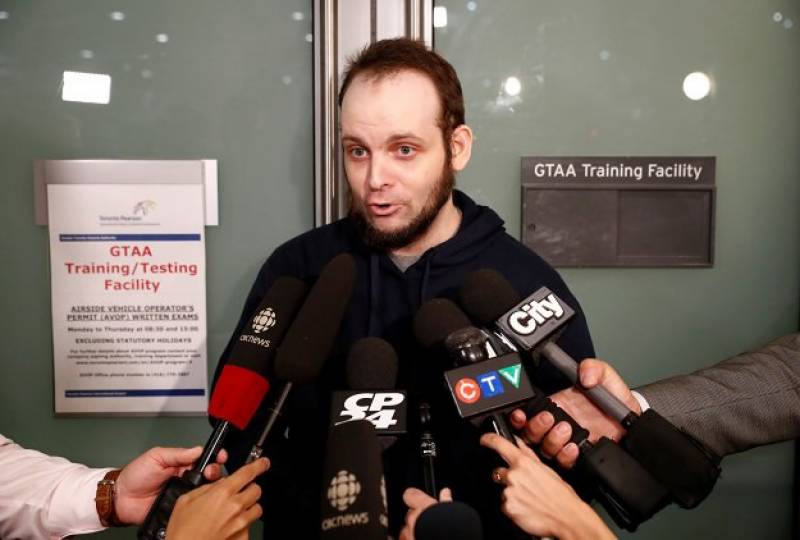 OTTAWA/TORONTO: A US-Canadian couple freed in Pakistan this week, nearly five years after being abducted in Afghanistan, returned to Canada on Friday where the husband said one of his children had been murdered and his wife had been raped.

American Caitlan Coleman and her Canadian husband, Joshua Boyle, were kidnapped while backpacking in Afghanistan in 2012 by the Taliban-allied Haqqani network. They arrived in Canada with three of their children.

“Obviously, it will be of incredible importance to my family that we are able to build a secure sanctuary for our three surviving children to call a home,” Boyle told reporters after arriving at Toronto’s Pearson International Airport, wearing a black sweatshirt and sporting a beard.

Pakistani troops rescued the family in the northwest of the country, near the Afghan border, this week.

“The stupidity and the evil of the Haqqani network in the kidnapping of a pilgrim … was eclipsed only by the stupidity and evil of authorizing the murder of my infant daughter,” Boyle said, reading from a statement, in a calm voice.

“And the stupidity and evil of the subsequent rape of my wife, not as a lone action, but by one guard, but assisted by the captain of the guard and supervised by the commandant.”

He did not elaborate on what he meant by “pilgrim”, or on the murder or rape. Coleman was not at the news conference.

Boyle said the Taliban had carried out an investigation last year and conceded that the crimes against his family were perpetrated by the Haqqani network.

He called on the Taliban “to provide my family with the justice we are owed”.

“God willing, this litany of stupidity will be the epitaph of the Haqqani network,” said an exhausted-looking Boyle.

He did not take questions form reporters.

The family travelled from Pakistan to London and then to Toronto.

Boyle provided a written statement to the Associated Press on one of their flights saying his family had “unparalleled resilience and determination.”

AP reported that Coleman wore a tan-colored headscarf and sat with the two older children in the business class cabin. Boyle sat with their youngest child on his lap.

US State Department officials were on the plane with them, AP added.

One of the children was in poor health and had to be force-fed by their Pakistani rescuers, Boyle told AP.

They are expected to travel to Boyle’s family home in Smiths Falls, 80 km (50 miles) southwest of Ottawa, to be reunited with his parents.

Canada has been actively engaged with Boyle’s case at all levels and would continue to support the family, the Canadian government said in a statement.

“At this time, we ask that the privacy of Mr Boyle’s family be respected,” it said.

The journey home was complicated by Boyle’s refusal to board a US military aircraft in Pakistan, according to two US officials who spoke on condition of anonymity. Boyle instead asked to be flown to Canada.

But Boyle said he never refused to board any mode of transportation that would bring him closer to home.

Boyle had once been married to the sister of an inmate at the US military detention center at Guantanamo Bay. The marriage ended and the inmate was later released to Canada.

The families of the captives have been asked repeatedly why Boyle and Coleman had been backpacking in such a dangerous region. Coleman was pregnant at the time.

Boyle told the news conference he had been in Afghanistan helping “villagers who live deep inside Taliban-controlled Afghanistan where no NGO, no aid worker, and no government” had been able to reach.

The Taliban and Haqqani network share the same goals of forcing out foreign troops and ousting the US-backed government in Kabul but they are distinct organisations with separate command structures.