Explainer: Does Nawaz Sharif’s statement on Mumbai attacks make him a traitor?
14 May, 2018 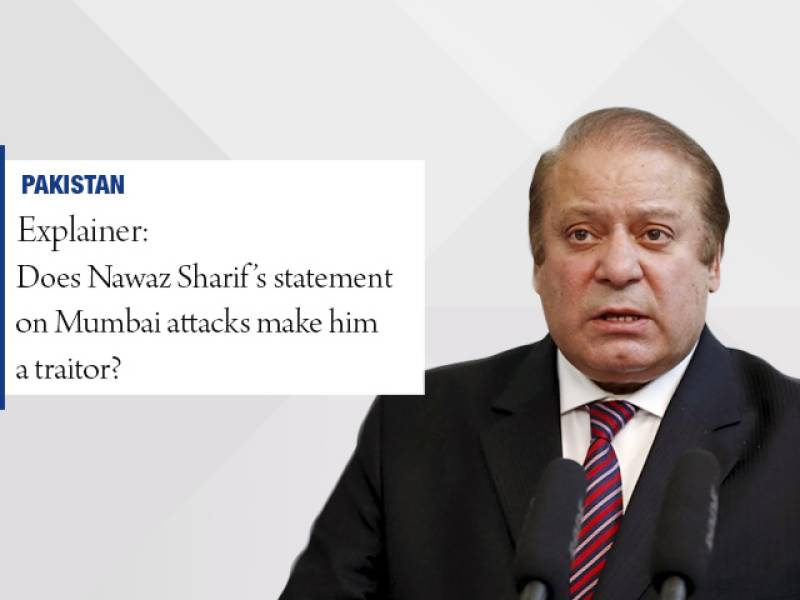 ISLAMABAD: An interview has stirred up a storm. Former PM Nawaz Sharif’s statement on the 2008 Mumbai attacks has given the country a new debate.

The National Security Committee is holding a meeting with the PM. Pakistan Peoples Party has asked of Mr Sharif to retract the statement. Pakistan Awami Tehreek wants a treason case registered against the former PM. And Pakistan Muslim League – Nawaz does not seem to have a uniform response.

In an interview to a Pakistani English daily, former PM Nawaz Sharif said that militant organisations are active. “Call them non-state actors, should we allow them to cross the border and kill 150 people in Mumbai? Explain it to me. Why can’t we complete the trial?”

‘Nawaz is a traitor’

Anchorperson Mubashir Lucman said no one should have a doubt about Nawaz Sharif being a traitor. “Whoever is trying to save him, be it Shahid Khaqan Abbasi or Shehbaz Sharif, they are all traitors of the country,” he said. “They should all resign on immediate basis.” According to him, they should be held accountable.

“I hold Gen (retd) Raheel Sharif also responsible,” said Lucman, adding that he should not have spared them over Dawn Leaks. “If he had held Maryam [Nawaz Sharif] by the neck or slapped Nawaz Sharif, it would have taught them a lesson.”

According to Lucman, Mr Sharif should be banned from media appearances. “They should languish in jails,” he said.

Lucman said that eight days before the decision to blacklist Pakistan is to be taken, Mr Sharif adopted the version of Narendar Modi and India on the Mumbai attacks. “Now, God forbid, Pakistan might be declared a terrorist state,” he said. “In 17 days, their term is ending. Later, they will rant about how economic recession came right after their term ended and others took over.”

Not the first time

Mr Sharif is not the first person to have spoken about the involvement of militants using Pakistani soil for subversive activities in India. Former FIA director-general Tariq Khosa wrote for a Pakistani English daily, saying: “Let both India and Pakistan admit their mistakes and follies and learn to co-exist while trying to find solutions to their thorny issues through peaceful means. Pakistan has to deal with the Mumbai mayhem, planned and launched from its soil. This requires facing the truth and admitting mistakes.”

On Monday, Mr Sharif spoke to the media outside the accountability court. He pointed out that Gen (retd) Pervez Musharraf and others had earlier said the same things about the Mumbai attacks. On Mr Sharif’s talk, Khalid Azeem said that Punjab CM Shehbaz Sharif has complicated the issue. “Everyone knows Mr Sharif meant the army when he talked about khalai makhlooq [aliens],” he said. “His view is that the army influences politics. Shehbaz Sharif had denied that, too. In today’s talk, Nawaz Sharif has owned everything that he said in the interview. Where does Shehbaz Sharif stand now?”

According to Azeem, it is true that former president Asif Ali Zardari was the first one to talk about the involvement of non-state actors when the Mumbai attacks happened. “But immediately after, he also said that no state agency was involved. Nawaz Sharif’s statement implies that we actually allowed the non-state actors to go to India and carry out the attacks.”

According to Adil, Shehbaz Sharif has been trying to work out a possible compromise for the party. “But Nawaz Sharif does not want that because he believes that if he can’t be in power then no one else from his party should be either,” he said. “Now, he is headed towards open confrontation with the army. His Indian connections are not new. We remember how he rushed to meet [Indian PM Narendar] Modi right after taking the oath. Gen (retd) Raheel Sharif saved him and his government.” He also said that Mr Sharif wanted to imply in the interview that Pakistan’s state institutions allowed the non-state actors to carry out the attacks in Mumbai.

Ghaznavi said we use the word ‘traitor’ with a convenience not seen elsewhere. “This is how we have been like for the past 70 years,” he said. “We started it with Madar-e-Millat Mohtarma Fatima Jinnah and it continues to date. I feel we should be careful about using this word.”

He, however, said that Nawaz Sharif’s statement comes at a time when he is already facing trouble. APP