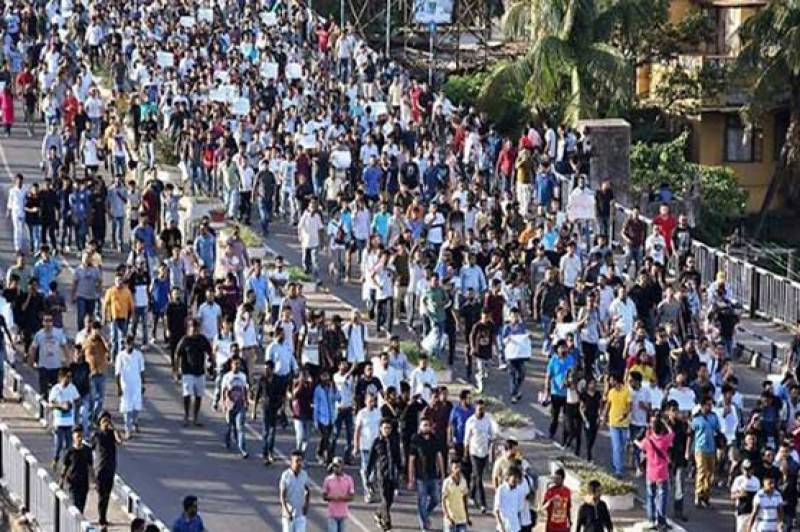 PANJURI KACHARI - The smartphone footage shows the two blood-soaked men pleading for their lives. Moments later they were dead, two more victims of lynchings sparked by rumours spread on Facebook and WhatsApp in India.

The two men were young and well-educated. Gregarious, dreadlocked musician Nilotpal Das, 29, and his businessman friend Abhijeet Nath, 30, were both from Guwahati, capital of the northeastern state of Assam.

On the fateful day last month when they were beaten to death by a crazed village mob wielding bamboo sticks, machetes, and rocks, the friends were driving back from a day in the country, near a popular waterfall.

"He liked to listen to the sounds of nature to find inspiration for his music," his grieving father Gopal Chandra Das, 68, told AFP at their home, the television table in the living room now a shrine to his son.

Viral rumours about kidnappers, spread through Facebook and WhatsApp, have led to the lynching deaths of some 20 people in the last two months in India, according to a tally from local media reports.

Indian authorities have scrambled to respond but awareness campaigns, public alerts and internet blackouts have had limited success in deterring the spread of misinformation.

Instead, officials blamed WhatsApp for the "irresponsible and explosive messages" being shared by its 200 million Indian users -- the company’s largest market.

WhatsApp said it was "horrified" by the violence and promised action. The social media giant took out full-page advertisements in Indian newspapers offering "easy tips" to sort fact from fiction on its platform.

On their June 8 excursion, the two men were unaware that "fake news" on child traffickers had been spreading on social media in the area.

In the isolated, impoverished district of Karbi Anglong, Facebook and WhatsApp have become the new word of mouth, and messages on the platforms -- however outlandish -- are often taken as gospel.

Late in the day, the two men were sitting by a stream when a villager confronted them, causing an altercation. The young men left in their car in a hurry, but their antagonist warned the next village they were coming.

"He made a phone call. He said that child kidnappers were on the way, that they needed to be stopped," said Gulshan Daolagupu, deputy division chief of Karbi Anglong.

The mob surrounded the car on the country road. Convinced they had caught the child kidnappers, they launched a savage attack, posting videos of the killings online.

An enquiry is under way to establish whether the suspect who instigated the attack, a 35-year-old taxi driver, genuinely believed he had caught the purported child kidnappers or whether he had ulterior motives. Some 50 people have been detained over the attack.

"Had social media not been there, had this been 2014 -- Facebook was not there, smartphones were not cheap -- this would not have happened," said G.V. Siva Prasad, superintendent of police in Karbi Anglong district.

"The speed at which it goes, nobody can address it, it is almost the speed of light."

Lynchings based on misjudgement or malicious information are not a new phenomenon in India. But the spread of smartphones and internet access in the country’s poorest and most isolated areas has exacerbated the problem.

Close to half a billion Indians are online, most accessing the internet via their smartphones. India was the fastest growing market for smartphones in 2017.

Internet penetration in rural areas, though low at 20 percent, is growing. The tumbling cost of handsets -- many priced at well below $100 -- coupled with cheap data plans is attracting many first-time users to the internet.

For researcher Abdul Kalam Azad, the lynchings in Panjuri Kachari must be seen in the particular context of Assam state, which is a patchwork of ethnic tribes and has been routinely hit by intercommunal strife.

"Assam has been experiencing violence for a long time. In this situation of conflict, fake news become more dangerous, more violent and that’s evident now," he told AFP.

The killing of Nilotpal Das and Abhijeet Nath has resonated broadly among urban, well-educated Indians and played on perceptions that rural districts are backward-looking and lawless.

"That feeling is impacting people a lot. That it could have been anyone, so innocent, in that barbaric incident." - APP/AFP