Pakistanis react to the brutal killings by Indian Army in IOK
14 Jul, 2016 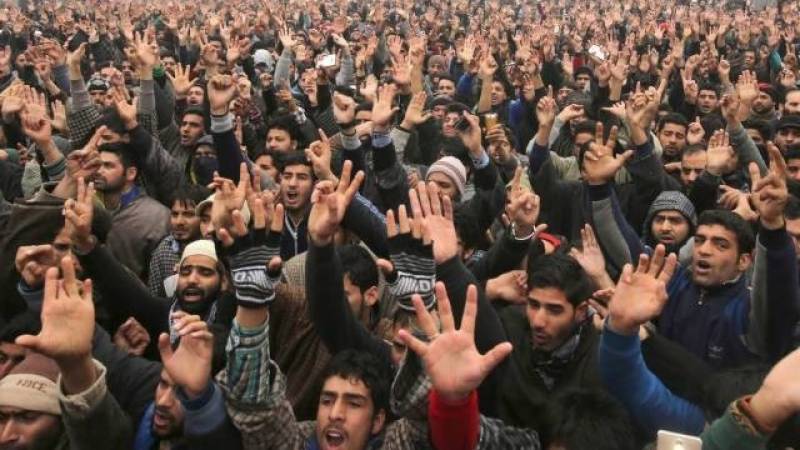 LAHORE: (APP) People across the country are holding protests against continuous Indian aggression and killings of innocent Kashmiris, reported on Thursday. According to details, large number of people participated in anti-India rally in Chagi

The protesters demanded international power to unite for the solution of Kashmir issue. In Dera Bugti, a motorcycle rally was conducted. The locals while holding banners and placards chanted slogans against India and condemned killings of Kashmiri Muslims.

Separately in Sohbatpur, public took to the street against Indian firing in Kashmir and raised their voices for ‘Kashmir will become part of Pakistan’. Other cities including Sibbi and Sadiqabad also observed protests.

The local communities have urged the government to prepare strategy regarding the matter so that the innocent Kashmiris could get right of self-determination. On the other hand, death toll during the protests in Indian-held Kashmir against the killing of separatist leader Burhan Wani reached 40 with more than 2500 injured under treatment in hospitals

Hundreds of protesters tried to storm a military airbase in India-held Kashmir on Monday, the third day of deadly clashes between government forces and demonstrators angered by the killing of a popular young separatist leader Burhan Wani who was an alleged commander of Kashmir’s largest separatist group Hizbul Mujahideen (HM).

Hurriyat leaders have also extended shutter down strike till July 15 after the Indian forces arrested All Parties Hurriyet Conference Chairman, Syed Ali Geelani and Mirwaiz Umer Farooq, in Hyderpora area of Srinagar, when they defied curfew and tried to march towards Naqashband Sahib in the city on the occasion of the Kashmir Martyrs’ Day.

Earlier, Pakistan Chief of Army Staff (COAS) General Raheel Sharif led the Corps commanders’ conference. Brutality of the Indian forces upon the people of occupied Kashmir was condemned during the conference whereas the Army Chief stated that the entire world needs to respect the will of the Kashmiri people. The Organization of Islamic Cooperation (OIC) had condemned, in the strongest terms, the killings of Kashmiris.