Turkey emerged as one of the largest defence partner of Pakistan
14 Feb, 2020 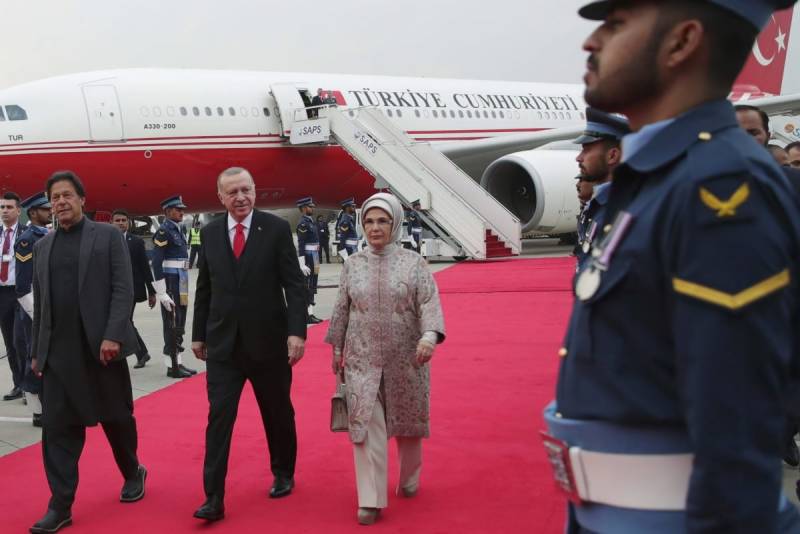 “President Erdoğan will be accompanied by a high-level delegation comprising cabinet members and senior government officials, as well as heads and CEOs of leading Turkish corporations,” the Pakistan Foreign Office said in a statement released before Erdoğan’s arrival.

“President Erdoğan and PM Imran Khan will hold a one-on-one meeting in Islamabad, after which both leaders will co-chair the sixth session of the Pakistan-Turkey High-Level Strategic Cooperation Council,” the Foreign Office’s statement further said.

The forum provides strategic direction to strengthening bilateral relations between the countries.

“There are plans for ‘vibrant cooperation’ in tackling Islamophobia, promoting Islamic solidarity and advancing shared goals of regional peace, security and stability,” the Foreign Office continued.

“Several important agreements and MoUs [Memoranda of Understanding] are expected to be concluded. The Turkish president will separately meet with [Pakistani] President Arif Alvi. President Erdoğan will also address a joint session of the parliament of Pakistan. Together with Prime Minister Imran Khan, he will address the Pakistan-Turkey Business and Investment Forum which brings together leading investors and business people from both sides,” the statement continued.

Asad Qaiser, speaker of the National Assembly of Pakistan, told The Media Line that “President Arif Alvi has called the joint session of parliament for Friday the 14th of February at 11 am.”

Azhar added that currently, trade between Pakistan and Turkey is worth $900 million a year. “To expand the bilateral trade volume, in 2019 both countries agreed to implement the Turkish-initiated Strategic Economic Framework, which includes a free trade agreement, technology transfer, capacity building, and defense cooperation as well,” he said.

“Several agreements will be signed under this Strategic Economic Framework,” he said.

Azhar told The Media Line, “PM Imran Khan has assigned me to ensure progress on bilateral agreements between Pakistan and Turkey. The prime minister also directed that a review meeting be held every month to monitor progress on the issues being resolved.”

Earlier, Khan told a meeting in Islamabad attended by federal ministers, special advisers to the prime minister and federal secretaries that “Pakistan-Turkey relations are of historic importance and the two countries stand side by side in every moment of difficulty.”

Khan emphasized that “Turkey’s clear stance on the Kashmir issue in support of Pakistan’s principle position is worthy of praise.”

Meanwhile, Turkish Ambassador to Pakistan Mustafa Yurdakul told the Anadolu Agency, “President Recep Tayyip Erdoğan’s visit to Islamabad would be a historic event and a major step toward exemplary bilateral ties between the two brotherly countries.”

“More than 60 Turkish businessmen will be accompanying the president. So, this is also a very important event which will take our commercial and economic relationship to a new level,” the ambassador said.

“The Pak-Turk Military Consultative Group was established in 1988, and it was recently upgraded to a High-Level Strategic Cooperation Council (HLSCC). Under the HLSCC, scores of military cooperation agreements have been signed during 2018-19.”

Faroque noted that “in 2000, after the US embargo, the Pakistan Armed Forces, particularly the Pakistan Air Force, had suffered many difficulties in keeping its F-16s [fighter jets] and C-130s [military transport aircraft] operational. It was Turkey who filled the vacuum and helped the PAF [Pakistan Air Force] not only to upgrade its US-made equipment but also provided every spare part to keep its ‘war and logistic’ squadrons running.

“Despite the US pressure, Turkey continued its tactical support of Pakistan during that era,” he said.

“In 2018, both countries signed another historic defense pact, and thus Turkey has become the second-largest arms supplier [to Pakistan] after China,” Faroque told The Media Line.

“The purchase of $1.5 billion worth of 30 Turkish T-129 attack helicopters was one of the defense mega-deals between both countries,” he said.

Salman Hashmi, an Islamabad-based regional political expert, told The Media Line that “Turkey is openly supporting Pakistan’s stance on the Kashmir conflict and in past, Turkey had maintained political and military support during Pakistan’s conflict with India.

“Meanwhile, Pakistan has reciprocated by expressing support for Turkey’s policy in the Cyprus conflict. Turkey along with Malaysia fully supported Pakistan when it was placed in the gray list by the Financial Action Task Force [on Money Laundering] last year,” he told The Media Line.

“Pakistan and Turkey both are strategically located in the region, and both countries’ leaderships have the potential to mobilize and lead the Islamic Ummah [the worldwide Islamic community] in securing their rights and getting rid of so-called radicalization and terrorism,” Hashmi said.