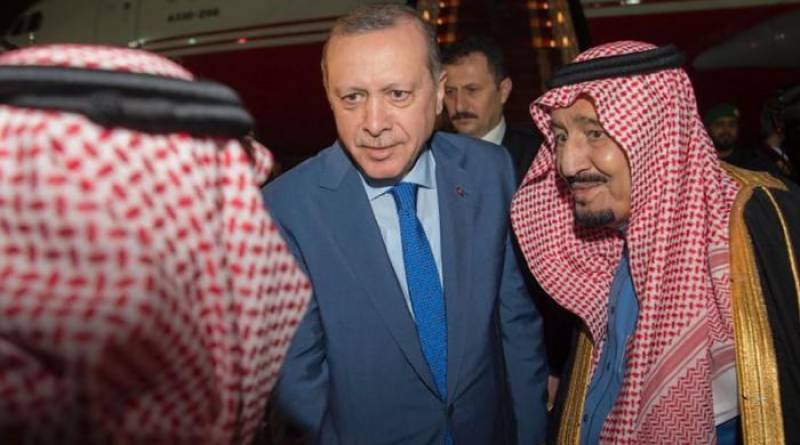 The two powers have become increasingly close over the past year, sharing in particular a backing for the opposition in Syria's war.

Before beginning his Gulf trip in Bahrain on Sunday, Erdogan said Turkish troops and their Syrian rebel allies had entered the centre of Al-Bab, the Daesh group's last stronghold in the northern Syrian province of Aleppo.

Since Saudi King Salman ascended the throne in 2015, Riyadh and Ankara have repaired ties strained over the 2013 ousting of Egypt's Muslim Brotherhood president Mohamed Morsi, a Turkish ally.

Saudi Arabia has been one of the main supporters of Egypt's current President Abdel Fattah al-Sisi, who as army chief overthrew Morsi.

In April last year Salman visited Erdogan, who awarded him a rare honour, the Order of State.

Turkey then began hosting Saudi warplanes at its Incirlik air base as part of the US-led coalition against Daesh militants, who are among an array of factions fighting in Syria.

Ankara has taken on an increasingly important role with Moscow and Iran as a powerbroker in the Syria conflict.

Analysts say the capture late last year by Syria's army of the country's second city Aleppo, backed by Russian air strikes, was a setback for Saudi Arabia and Qatar.

In January Turkey, along with Assad allies Russia and Iran, sponsored talks in Kazakhstan between Syrian rebels and government officials.

There was no breakthrough, but Kazakhstan has proposed another round in Astana this Wednesday and Thursday, before United Nations-sponsored peace talks resume in Geneva on February 23.

On Monday in Manama, Erdogan called for a "safe zone" in northern Syria where people displaced by the war could go.

He attended the first meeting of a coordination council to enhance ties between the two countries.

Both Riyadh and Ankara are hoping for better relations with Washington under President Donald Trump.

For Turkey, ties were strained under Barack Obama because of Washington's support for Syrian Kurdish militia, which Ankara views as "terrorist" groups.

Saudi Arabia felt Obama was reluctant to get involved in the civil war in Syria and was tilting towards its regional rival Iran.

From Riyadh, Erdogan on Tuesday will journey to Qatar, with which Turkey has maintained strong ties for years. Qatar also hosts a Turkish military base.

While both states are united in their backing for rebels fighting Assad's regime, they also shared support for Egypt's Muslim Brotherhood.