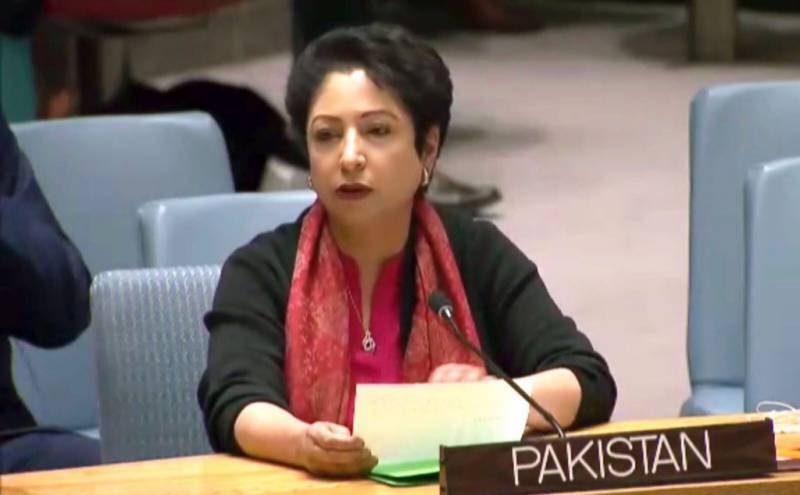 UNITED NATIONS: (APP) Pakistan has warned against linking Islam or any other faith with terrorism, while calling for fully analyzing and understanding the threat in all its complexities.

"The global campaign against terrorism cannot be reduced to a slogan slandering Islam or any other religion or race," Ambassador Maleeha Lodhi told the UN Security Council on Monday, as she reiterated Pakistan's commitment to do its part in eliminating the scourge of terrorism.

Speaking in a debate on addressing the danger of terrorist attacks against critical infrastructure, she also underscored the need to examine the reasons why terrorism -- despite a global campaign against this menace -- continues to evolve in new and more virulent forms and ideologies and across ever extending geographic regions, threatening peace and security.

In this regard, the Pakistani envoy underscored the need to address the underlying causes that create terrorist recruits, unresolved internal and inter-state conflicts, illegal use of force, external aggression and intervention, foreign occupation, denial of self-determination, political and economic injustice and the marginalization and alienation of communities and groups.

"It is only by addressing these underlying causes can the world community erode the appeal of the narratives of hate and hostility which provide the oxygen for the existence and growth of terrorism."

In her remarks, Ambassador Lodhi said Pakistan was suffering from "region-based and supported" terrorist acts aimed at destroying and disrupting the life of the people, but the country was determined and fully capable of repelling such state sponsored terrorism.

Pakistan's resilience had been tested many times, she said, emphasizing that a multi-pronged strategy -- the military-led Zarb-e-Azb operation -- had helped to destroy terrorist organizations and constrain their ability to carry out lethal attacks.

"This comprehensive approach has succeeded in expelling terrorist organizations from our territory and greatly constrained their ability to carry out lethal attacks, as evident from the dramatic decline in the number of such attacks, despite cowardly attack in Lahore," Ambassador Lodhi said.

Pointing out that Pakistan continues to face increasingly externally supported terrorists, she said, "One of their principal targets is the major infrastructure we are currently building in Pakistan in order to undermine our economic accomplishments and stability" -- an obvious reference to the China Pakistan Economic Corridor (CPEC) project.

At the regional level, sharing of information and threat assessment, as well as effective border management can significantly enhance national capacities to deter and defeat terrorism.

In that spirit, the ambassador said, Pakistan joined the South Asian Association for Regional Cooperation's Convention on Suppression of Terrorism. "Unfortunately, SAARC as an organization has become a victim of the hostile agenda of some of our neighbours," she said. "This has severely hampered the ability of our region to respond to its multiple challenges, including terrorism."

State control of infrastructure and efforts to identify areas of concern were important, as was a global response to deter and defeat terrorism, she said.

Identifying threats and developing partnerships were among the initiatives needed.

The Security Council also adopted a resolution that urged all States to make concerted and coordinated efforts, including through international cooperation, to raise awareness and expand knowledge of challenges posed by terrorist attacks, so as to be better prepared for such attacks.

Also by that text, the Council called upon all member states to establish criminal responsibility for terrorist attacks aimed at critical infrastructure and to explore ways to exchange information and enhance cooperation in preventing, mitigating and responding to such incidents.

It encouraged the United Nations, Member States and regional and international organizations to share good practices and measures in managing the risk of terrorist attacks on critical infrastructure, a term covering bridges, power lines, airports and nuclear power plants, among other facilities.