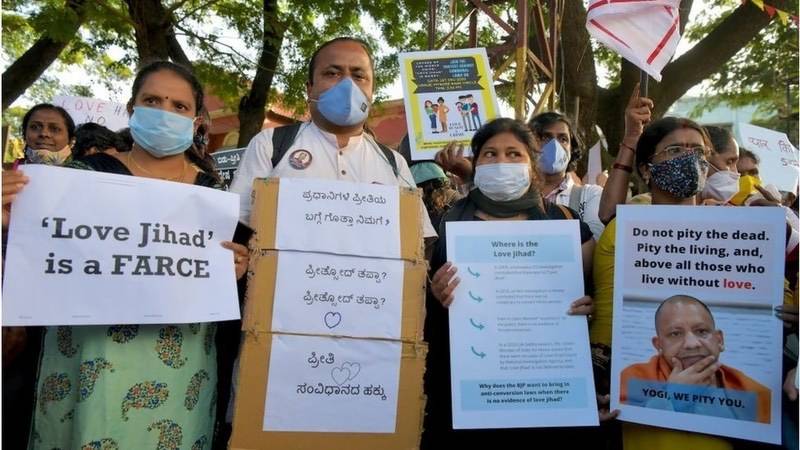 * Police in India initiated a crackdown on interfaith marriage ceremonies and apprehended at least 10 Muslim men under a law that prohibits forced religious conversions, The Guardian reported.*

The Hindu right-wing conspiracy theory, "love jihad" states that Muslim men lure Hindu women into marriage in order to force them to convert to Islam. The central government admitted that it has no official records of any such incidents. However, this theory has been used to justify legislation enacted in Uttar Pradesh and is proposed in four other Indian states.

Earlier this week, UP's Kushinagar police stopped a marriage between two Muslims after it raided a place on a tip-off by a Hindu right-wing group. The police stormed the ceremony and arrested Haider Ali. They kept him in custody overnight and tortured him for hours using a leather belt. The man was released after the family proved that the bride was Muslim by birth.

The recent action by Indian police has raised fears that Muslims are being targeted. Under this law, no Hindus have been arrested.

A day after the law was enacted in December, police raided a ceremony in Lucknow where a marriage between a Hindu woman, Raina Gupta and a Muslim man, Mohammad Asif was under way. The wedding ceremony was to include both Hindu and Muslim rituals and the families said neither was going to convert their religion. However, police halted the wedding and prevented the families from going ahead.

In another case that took place in 2019, a Muslim man, Owais Ahmad, was arrested and sentenced to 14 days judicial custody for allegedly trying to pressure a Muslim woman into converting to Islam. The woman is married to a Hindu man now and Ahmad said he had "no link with the woman".

Similarly, a 27-year-old Muslim man Rashid and his brother were detained by police in Moradabad after attempting to register Rashid's marriage to a 22-year-old Hindu woman, Muskan Jahan, who had converted to Islam before the wedding.

Rashid is in prison on charges of forcible conversion of his wife, and Jahan was taken to a shelter. She denied any coercion and said, "I am an adult. I am 22 years old. I got married of my own free will."