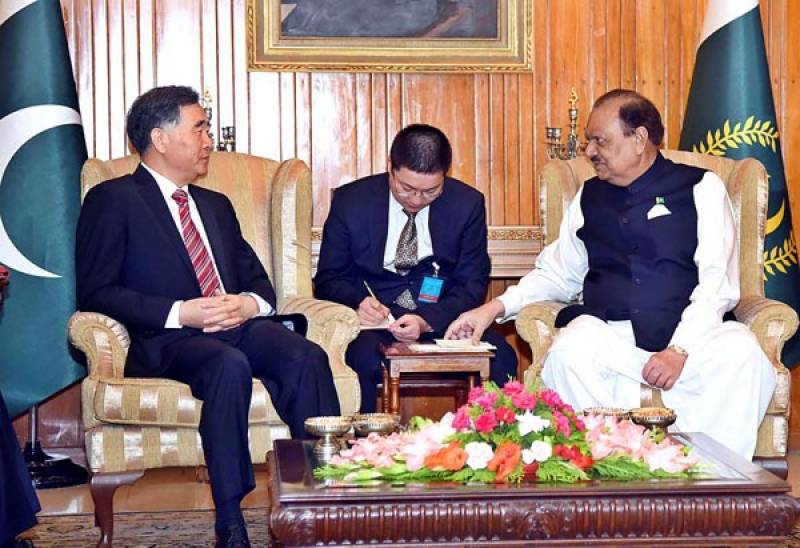 ISLAMABAD: President Mamnoon Hussain Monday while expressing concern over the Indian incursionsinto the Chinese territory, said Pakistan fully supported the stance of China.
Talking to Vice Premier of China Wang Yang here at the President House, he appreciated China for its adept handling
of the issue and reiterated that Pakistan stood by it on the issues of Tibet, Sinkiang and South China Sea, a statement from the President House said.
President said that Pakistan would also continue to work along with China for eliminating terrorism. He was also appreciative of the Chinese role in bringing peace and stability to Afghanistan and hoped it would bring positive results and the issue would be resolved at the earliest.

Both the leaders discussed the whole range of their bilateral affairs, with a particular focus on the ChinaPakistan Economic Corridor (CPEC) and expressed the resolve to ensureits early completion as the project was vital for the regional peace, security and stability and prosperity.
The meeting was also attended bydelegations from the either sides.The President said that Pakistan desired to resolve all issues, including Jammu and Kashmir, with India throughdialogue. He said that Pakistan was looking forward to the visit ofChinese Premier to Pakistan soon.
President Mamnoon thanked the Chinese Vice Premier forparticipating in the Pakistan’s 70th Independence Day celebrations and said it was reflective of their strong bondsand friendship. He said the two countries had stood by eachother through thick and thin and their ties would continue to strengthen in the days ahead.
Chinese Vice Premier, Wang Yang said that Pakistan China friendship was higher than the political considerations.He said Pakistan had played a positive role in countering terrorism according to its priorities and situation in thecountry was now far better. He assured his country’s complete cooperation in this regard.
He was also appreciative of the speech of the President earlier at the flag hoisting ceremony and hoped it wouldfurther unite the nation and strengthen it. He underlined the need for stronger Pakistan China economiccooperation and said China would increase imports from Pakistan for a better balance in trade.
He said the ties between the two countries were exemplary and wouldfurther strengthen in the days ahead.