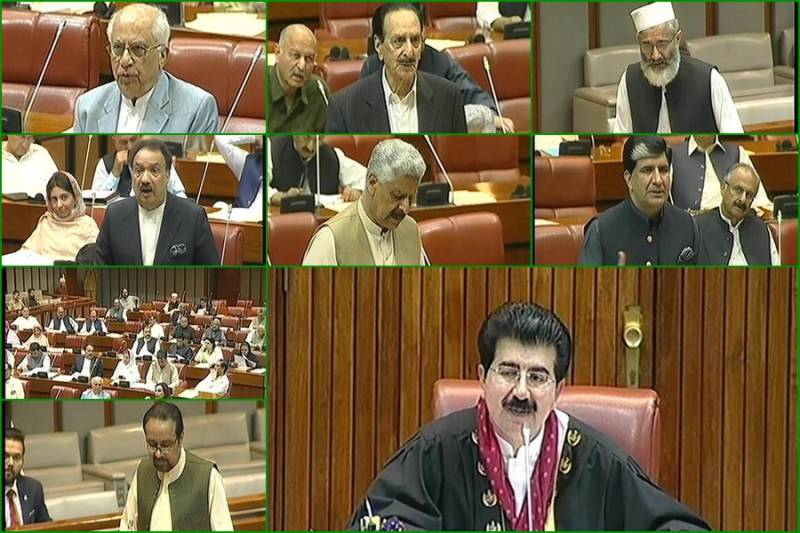 The Bill moved by Law Minister Mahmood Bashir Virk is aimed at extending jurisdiction of the Supreme Court of Pakistan and the Peshawar High Court to FATA.

Chairman Senate Muhammad Sadiq Khan Sanjranai has also formed a special committee to look into the matter raised by Syed Muzaffar Hussain Shah regarding acute water shortage in Sindh due to non-implementation of Water Accord 1991.

Minister for Parliamentary Affairs Shaikh Aftab Ahmed assured the House that no changes are being made in 18th Amendment of the constitution.

He was responding to a calling attention notice moved by Mian Raza Rabbani and Sassui Palijo.

The Minister said the unanimously passed 18th amendment is a marvelous achievement of political parties for which Mian Raza Rabbani’s contribution is commendable.

Chairman Senate Muhammad Sadiq Sanjrani also admitted an adjournment motion moved by Dr Sikandar Mandhro to discuss the report that Pakistan will run out of forests within next 50 years if deforestation continues at the current rate.

The House has now been prorogued.

Chairman Senate Muhammad Sadiq Sanjranai has formed a special committee to look into the matter raised by Syed Muzaffar Hussain Shah regarding acute shortage of water in Sindh due to non-implementation of Water Accord 1991.

The committee was formed with the consent of the leaders of the house and the opposition. APP/AFP