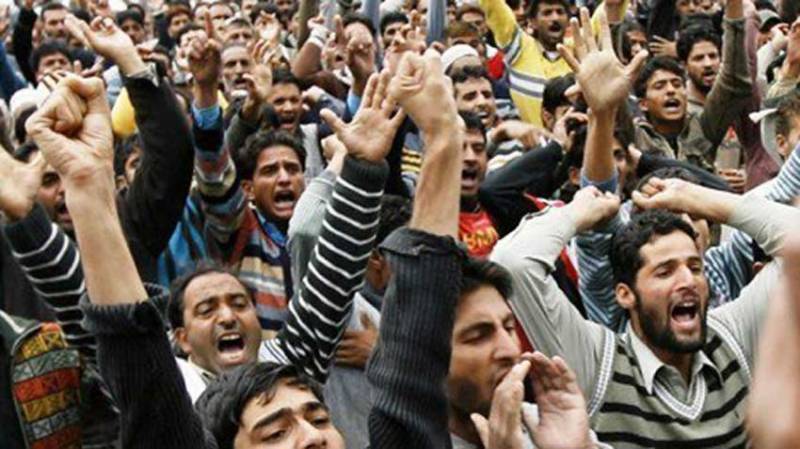 ISLSMABAD:Massive protest demonstrations were held in all major towns of occupied Kashmir today against the killing of four civilians in Kulgam town in Indian state terrorism.

In occupied Kashmir, massive protests were held in all major towns of the territory today against the killing of four civilians by Indian troops in Khudwani area of Kulgam.

Call for the demonstrations were given by the Joint Resistance Leadership.

It was also aimed at demanding justice for eight-year-old girl Aasifa, who was murdered in Kathua area of Jammu by the people affiliated with extremist Hindu groups and Special Police Officers of Indian police.

Indian troops and police personnel fired pellets and teargas shells to disperse the protesters at various places, injuring several of them. The puppet authorities continued to impose restrictions in different areas of occupied valley to prevent people from staging demonstrations.

The Jamia Masjid of Srinagar was sealed and people were not allowed to offer Juma prayers at the historic mosque.

The puppet administration kept Syed Ali Gilani, Mirwaiz Umar Farooq, Muhammad Yasin Malik and other Hurriyat leaders under house arrest or in custody to stop them from leading the protests.

Meanwhile, complete shutdown was observed in North and South Kashmir and in Bhaderwah, Kishtwar and Banehal areas of Jammu region against the killings.

On the other hand, prominent global rights bodies, Amnesty International and Human Rights Watch in their statements assailed the lawyers and right-wing groups for introducing religious prejudices into the investigation of Aasifa murder case. APP/AFP