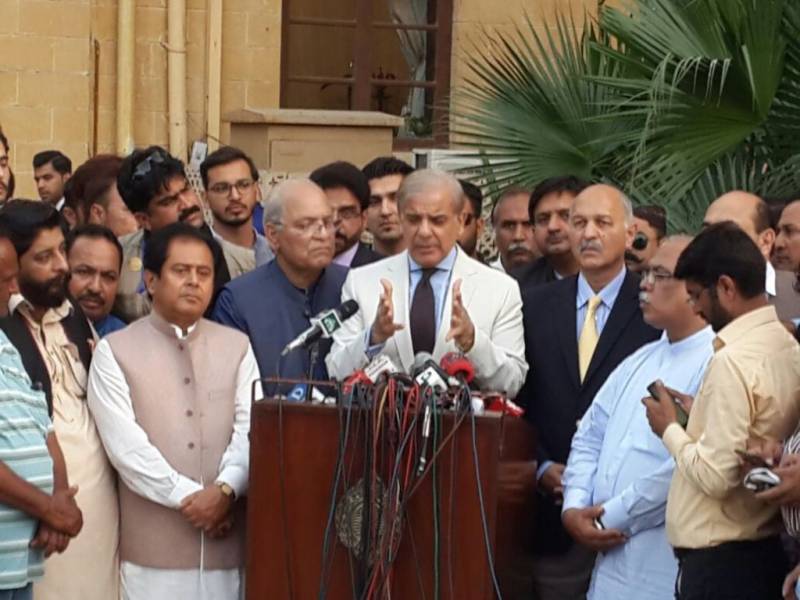 KARACHI: Chief Minister of Punjab, Shehbaz Sharif, who is also President of the Pakistan Muslim League- Nawaz (PML-N), Saturday called for a ‘grand dialogue’ to develop a ‘national narrative’ regarding ties with India and Afghanistan.

Speaking to editors, senior journalists and analysts here at Sindh Governor House, Sharif said; “dialogue among all stakeholders, including Army, should be initiated at earliest”.

While responding to a question about two different types of responses from both brothers – one meld and other harsh – regarding the recent developments, Sharif said “it is necessary to initiate such dialogue”.

Asked as what constitutional provision makes security forces evident part of a national dialogue regarding ‘foreign policy’ Sharif insisted that such issues had been discussed in past.

“Qaid-e-Azam divided India to make a united Pakistan. But, are we united today?” Shehbaz asked.

Shehbaz said his province has witnessed impressive development whereas other lagged behind despite getting more than their share in NFC Award. “We gave Rs70billion of our share of NFC to other provinces.”

“When one province progresses and others lag behind it’s dangerous for the country,” Punjab CM said, asking on other province to utilize their resources for development and progress.

Sharif said that peace in Karachi is restored due to the efforts by PML-N government. “Several projects, including green line and K4 are all started by the federal government.”

“Nawaz Sharif has always been my leader and he will continue to remain my leader because the development we see in Pakistan could be seen just because of the vision and policies of former Prime Minister, Mian Nawaz Sharif,” Shehbaz said.

Shehbaz Sharif arrived on a day long visit of Karachi. After his arrival, Shehbaz shared on social media that a peaceful and prosperous Karachi is central to Pakistan’s progress.