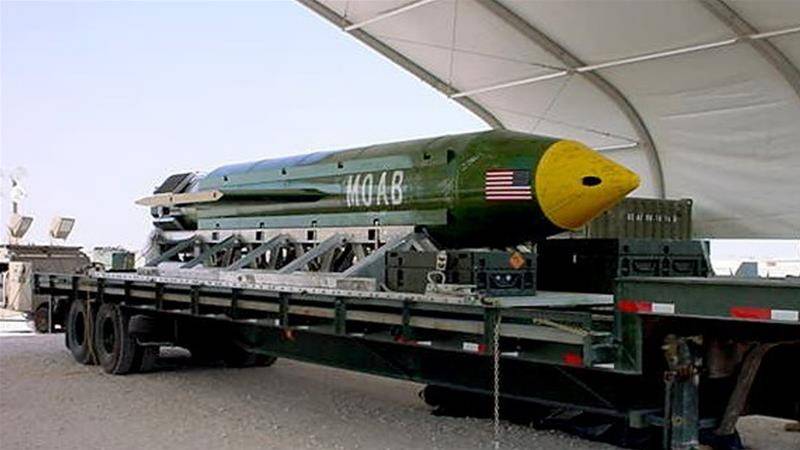 WASHINGTON: The US military on Thursday dropped the largest non-nuclear bomb ever deployed in combat, targeting an Islamic State complex in Afghanistan, the Pentagon said.

General John Nicholson, who heads US Forces Afghanistan, described the weapon as the "right munition" to reduce IS obstacles and maintain the momentum against militants in the region.

"As ISIS-K's losses have mounted, they are using IEDs, bunkers and tunnels to thicken their defense," he said, referring to a regional affiliate of the militant group.

White House spokesman Sean Spicer said: "We must deny them operational space, which we did."

The MOAB is better known by its nickname, the Mother of All Bombs, and was rapidly developed in 2002-2003 around the time of the US-led invasion of Iraq.

The US military on Tuesday said an American special forces soldier had been killed while conducting operations against IS in Nangarhar, though it was not clear if Thursday's strike was connected in any way.

Nangarhar, which borders Pakistan, is a hotbed of IS militancy. US forces have conducted a number of air strikes on militant bases in the area since August last year.

IS, notorious for its reign of terror in Syria and Iraq, has been making inroads into Afghanistan in recent years. It has attracted disaffected members of the Pakistani and Afghan Taliban as well as Uzbek Islamists.

But the group has been steadily losing territory in the face of heavy pressure both from US air strikes and a ground offensive led by Afghan forces.

Islamic State's strength in Afghanistan has fallen to 600-800 fighters from 3,000 in early 2016, NATO has said, adding that it killed the top 12 IS commanders in the country last year.

According to the Air Force, the last time the MOAB was tested in 2003, a huge mushroom cloud could be seen from 20 miles (32 kilometers) away. (APP)