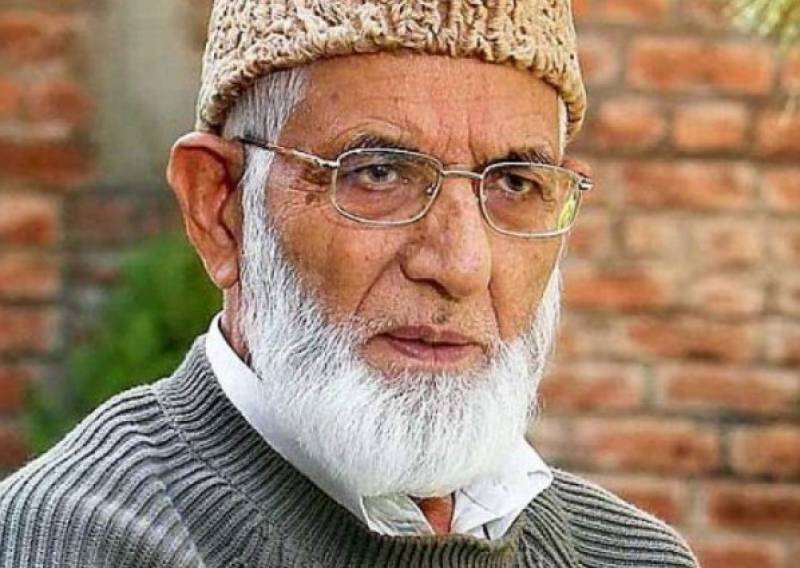 ISLAMABAD: The Chairman of All Parties Hurriyet Conference, Syed Ali Gilani in occupied Kashmir, has said that the unprecedented boycott of Indian Parliamentary by-election in Srinagar constituency had unnerved New Delhi.

According to Kashmir Media Service, strongly reacting to the threat statement of Indian Home Minister, Rajnath Singh, in which he warned Kashmiri youth of consequences, Syed Ali Gilani said, "They (Indian rulers) are losing balance and it depicts their frustration. It is ridiculous. Instead of stating any logic they are issuing threats and adding fuel to fire."

The APHC Chairman in a statement in Srinagar said that it was unfortunate that Rajnath Singh and other Indian politicians instead of relying on rational thinking were pursuing their fanatical dogma.

"Even after getting into power corridors, these men from Jan Sangh cadre are still waving Teer and Trishul and lack of maturity.

It is common practice that politicians running state affairs do become mature but the case with these politicians is quite different," he said.

Syed Ali Gilani said, it is foolish to see the Kashmir dispute through law and order prism. "Resistance and resentment by youth show their passion for freedom.

None among youth derives pleasure by braving bullets or loosing eyesight. It is youth who show their resentment against the obstinate attitude and brute force used by Indian forces," he said.

The egoistic approach adopted by Indian authorities is root cause of prevailing situation in occupied Kashmir, he added.

Referring to Rajnath's statement about "transformed Kashmir", the APHC Chairman said that he (Rajnath) should show wisdom and mature approach as his rhetoric about transformation had already proved hoax in year 2016 when he claimed to change Kashmir situation in a week's time.

"Had authorities in Delhi adopted a fair approach towards the Kashmir issue, the change could have been witnessed in a single month.

However, no positive change could be expected through intimidations and use of military power," he added. (APP)