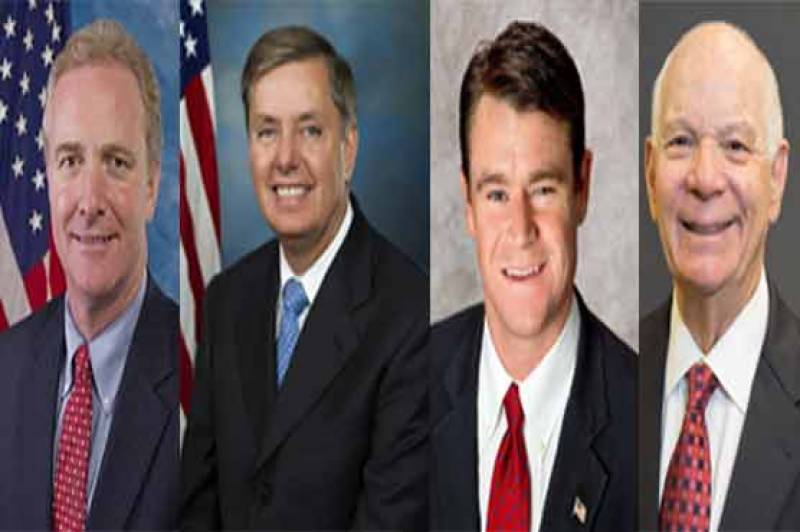 WASHINGTON - Due to Pakistan’s successful diplomacy against India over Occupied Kashmir a group of US Senators have written a letter to President Donald Trump over playing role for immediate lifting of curfew and sanctions in Indian Occupied Kashmir.

The bipartisan group of US senators is pressing President Trump to take immediate action to help facilitate an end to the deepening humanitarian crisis in the disputed region of Kashmir.

As per details, Sens. Chris Van Hollen (D-Md.), along with Lindsey Graham (R-S.C.), Todd Young (R-Ind.), and Ben Cardin (D-Md.), wrote to Trump Thursday urging him to “to immediately facilitate an end to the current humanitarian crisis.”

They asked him specifically to put pressure on Indian Prime Minister Narendra Modi to lift curfews imposed on residents of Kashmir and restore telecommunications services in the disputed territory, among other steps.

“While we support your goal of working with the parties to help find a long-term resolution to the status of Kashmir, we write now to urge you to immediately facilitate an end to the current humanitarian crisis there,” the senators wrote Thursday.

“In keeping with your offer of assistance in July, we believe that U.S. engagement with India will be critical in providing relief for the all of the people of Kashmir,” they wrote.

The senators particularly raised concerns about the Indian government’s revocation of Article 370 of its constitution, which granted special status to allow the state of Jammu and Kashmir to make its own laws. They also pointed to India’s decisions to impose a curfew on residents of Kashmir; to deploy thousands of troops to the region in August; and to impose a communications blackout as evidence the situation has worsened and needs Trump’s attention.

“We ask that you call upon Prime Minister Modi to fully restore telecommunications and internet services, lift the lockdown and curfew, and release Kashmiris detained pursuant to India’s revocation of Article 370,” the senators wrote.

The senators said the United States could help to play a “constructive role” in resolving underlying disputes between India and Pakistan after the humanitarian situation is addressed.