What Maryam Nawaz says on her comparison with Benazir Bhutto
13 Sep, 2017 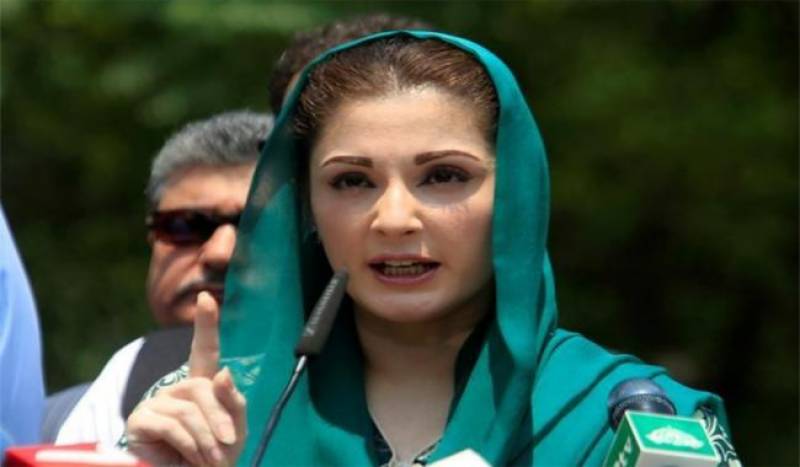 LAHORE: In campaigning for a Pakistan by-election seen as a test of support for ousted Prime Minister Nawaz Sharif, the most visible figure is not on the ballot: Sharif’s daughter, Maryam, widely touted as his political heir-apparent.

This past weekend, crowds mobbed Maryam’s car and threw rose petals as she crisscrossed the eastern city of Lahore campaigning for her mother, Kulsoom, who is the ruling Pakistan Muslim League-Nawaz (PML-N) party’s candidate to contest the seat Nawaz was forced to vacate by a Supreme Court ruling in July.

With Kulsoom in London for cancer surgery, accompanied by Nawaz, 43-year-old Maryam has led the campaign with fiery speeches denouncing Nawaz’s opponents and the Supreme Court.

Her influence within the PML-N has grown in recent years, with senior party figures crediting her with Nawaz’s move to embrace relatively more pro-women and liberal causes.

In a rare interview with foreign media, Maryam outlined to Reuters what drives her political ambitions as she emerges from her father’s shadow to become a prominent figure in the ruling party he still controls.

“I‮'‬m proud to be the torch bearer of ideology which PML-N has,” Maryam said at the weekend in Punjab’s provincial capital Lahore, her father’s electoral power base. “I am (Nawaz‘s) reflection, I am his extension. I have grown up espousing his agenda, his ideology.”

Maryam has framed the election as a chance for voters to protest the Supreme Court’s verdict against her father and help the PML-N flex its electoral muscle.

“Your vote was disrespected and disregarded, will you answer to this disrespect on Sept. 17?” Maryam asked at a recent rally.

The by-election is seen as a litmus test for the PML-N’s political fortunes in the wake of Nawaz’s ouster, and an early indicator of voter sentiment ahead of a general election next year.

Imran Khan, on the ascendancy after Nawaz’s ouster, and eager to make inroads into the PML-N’s political heartlands in Punjab, has accused Maryam of benefiting from alleged corruption swirling around her father, and cast the by-election as a plebiscite on corruption.

“This election will decide where the people of Pakistan stand,” Khan, the leader of the Pakistan Tehreek-e-Insaf (PTI) party, told crowds in Lahore last week.

The PML-N made Maryam - a telegenic but inexperienced politician - the face of the campaign despite a Supreme Court-appointed panel accusing her of signing forged documents to obscure ownership of offshore companies used to buy upmarket London flats.

She denies any wrongdoing but the Supreme Court has ordered the National Accountability Bureau (NAB) to launch a criminal investigation into her, Nawaz and other family members.

Ahead of another rally on Sunday portrayed herself as a campaigner for democracy.

“Our history is marred with dictatorships and repeated attacks on democracy, so this is what I struggle for,” she told Reuters.

Maryam says her father’s dismissal by the Supreme Court is a conspiracy, noting his success in reinvigorating the economy - with a pro-business focus on infrastructure spending to boost development - and overall popularity “sent alarm bells ringing” for those who don’t want Pakistan to have a strong leader.

“This was the main reason he was being targeted,” she said, before adding: “That’s all I can say.”

Such coded talk is a familiar dance in Pakistan, where politicians speak between the lines to imply that the hidden hand of the military is behind unfolding events.

Asked if she is talking about elements of the military being involved in her father’s ouster, as some senior PML-N figures have hinted, Maryam paused before saying: “It’s not my place to comment”.

Maryam was coy when asked whether she has ambitions to be prime minister one day, saying she was not eyeing anything and was for now “happy with love and affection that I‘m getting”.

But senior PML-N officials expect her to at least become a minister in the next cabinet if the party holds on to power after the 2018 poll. Others have suggested she may become a leader soon.

Maryam was more forthcoming when asked about comparisons with slain female leader Benazir Bhutto. “I have a lot of respect for the lady, but ... the only thing which is common between us is gender,” she said.