Pakistan to launch state of the art naval warship
13 May, 2022 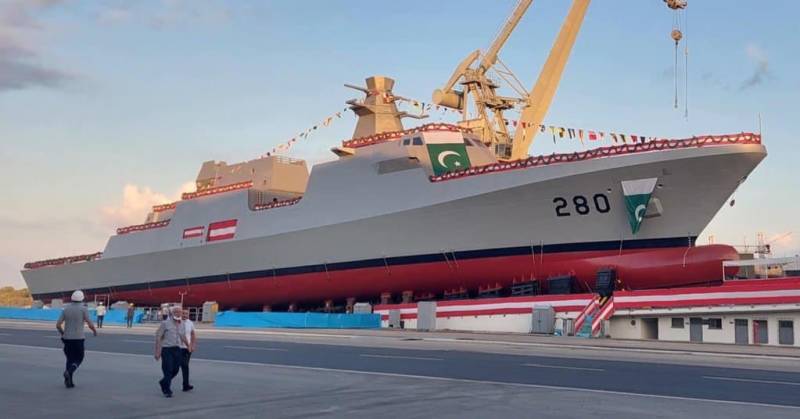 According to the Pakistan Strategic Forum, "The class of four Babur corvettes are being built under the joint venture MILGEM project between Pakistan and Turkey, with 2 ships being built in Istanbul, Turkey and 2 in Karachi, Pakistan at a cost of around $1.5 Billion to the Pakistan Navy. The Babur Class Corvettes are 3,000 tonne multi-mission platforms, equipped for anti-ship warfare (AShW), anti-submarine warfare (ASW) as well as anti-air warfare (AAW).

"In the Anti-Surface category, the corvettes will be armed with ATMACA anti-ship missiles, with two four-cell launchers. ASuW helicopters can also be deployed from the ship, carrying anti-ship and anti-submarine weapons.

"In anti-air warfare, the corvettes have a 12 cell GWS-26 vertical launch system (VLS) that carries the MBDA Albatros NG/Common Anti-Air Modular Missile-Extended Range (CAMM-ER) surface-to-air missile (SAM) with a range of between 50-65 kilometres. The Babur-class will also use an Aselsan Gökdeniz dual 35 mm close-in-weapon-system (CIWS) with Aselsan ATOM airburst ammunition for terminal and point air defense.

"In Anti-Submarine Warfare (ASW), the corvettes have two 3-cell 324 mm lightweight torpedoes launchers as well as the Yakamos hull-mounted sonar and a HIZIR towed array sonar system as well as decoy. ASW helicopters can also be deployed from the ship with submarine hunter-killer capabilities.

"Other weapons systems include a 76 mm OTO Melara Super Rapid main naval gun and two Aselsan STOP 25 mm machine guns. The ships will also have a 10-ton capacity helicopter hangar and deck. The warships have a range of 9,300 kilometres and are powered by General Electric LM2500 CODAD engines.