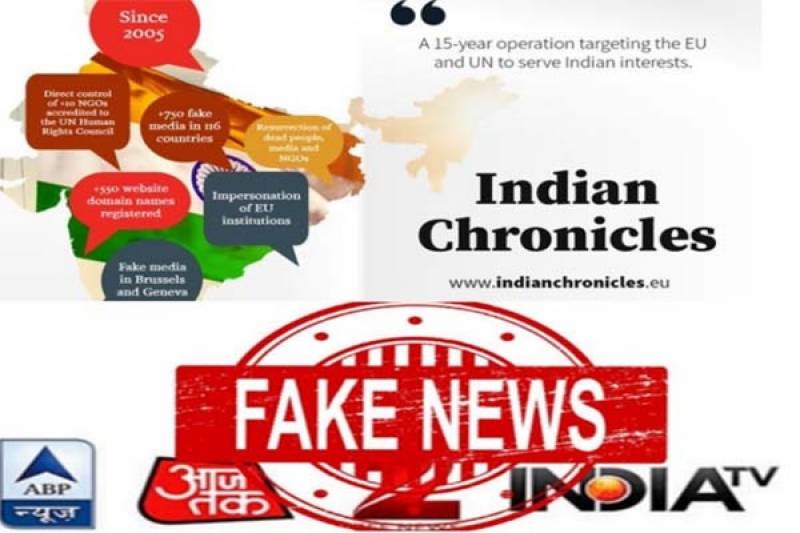 LAHORE - In the modern technology digital era, social media has become a malicious warzone front to capture economies, to fulfill or spread the desired narratives and goals against a group or any country around the world.

British Broadcasting Corporation (BBC) on Wednesday reported through its media outlets that the executive director of an Information authenticity check system, EU DisinfoLab, Alexandre Alaphilippe after a detailed investigation has published an extensive report containing details of Indian propaganda and its influence operations against Pakistan by using fake identities of United Nations and European Union and its parliament.

The report has revealed that so far it was the ever largest fake news network which had so far been exposed.Revealing the report, Alexandre Alaphilippe had further revealed that around 750 fake websites were being run from 116 country-origins, adding that to mislead the world community 10 NGOs were working with UN Human Rights Council (UNHRC), and 550 websites were being used to disseminate malicious propaganda, through fake identities (ID). Foreign Minister Shah Mahmood Qureshi and National Security Adviser to Prime Minister Dr Moeed Yusuf had urged the top world bodies in a joint press briefing on Friday to take serious note of India’s evil campaign by using their names against Pakistan, which had been recently exposed through publication of Indian Chronicles.

It is worth mentioning here that the EU DisinfoLab has recently issued its latest investigative report featured ‘Indian Chronicles- Subsequent Investigation: Deep dive into a 15 year operation targeting EU and UN to serve Indian interests’, revealing a vast network of fake media outlets, think-tanks and NGOs involved in abuse of international organizations.

Foreign Minister Shah Mahmood Qureshi said India had launched a smear campaign against Pakistan, however stressed that “truth could not be hidden for long”. Noted defence analyst Lt General (R) Naeem Khalid Lodhi told APP that the subversive agenda and fake attempts by the Indian media on the behest of the Pakistan obsessed Bharatiya Janata Party, Rashtriya Swayamsevak Sangh (RSS) designs were reflective of their nefarious and particular mindset against Pakistan.

It was needless to say that the Indian media’s absurd and fake claims regarding various ongoing social political and diplomatic events, continued to hit new lows, adding the Indian media and the Modi’s regime would be better advised to focus on their political turmoil, farmer’s protests and unrest currently going on in India.

It may be mentioned here that the Foreign Office (FO) spokesperson Zahid Hafeez Chaudhri during his weekly media briefing had already exposed the evil design propaganda and fabricated news reports of Indian media regarding Saudi Arabia’s participation and role in the assessment of Pakistan’s FATF action plan, which were being maliciously propagated.

“Pakistan and Saudi Arabia’s strong fraternal ties are an example for the whole world as the both countries enjoy unprecedented ties and have always cooperated with each other on all matters of political, bilateral, regional, and of international importance, “the spokesperson had asserted.

Pakistan Telecommunication Authority (PTA) sources told APP that recently the authority had approached the ‘Twitter’ administration to ask them to take serious and immediate action against fake Indian social media accounts spreading false information and malicious propaganda against Pakistan. In the wake of the current false and absurd campaign targeting Pakistan to mislead the people by spreading fake and baseless information, the sources told APP that the authority had also stressed upon the Twitter administration to effectively block Indian handles, involved in the misleading propaganda against Pakistan, its institutions and other global forums.

Former Human Rights’ Commission of Pakistan ( HRCP) chairperson Dr. Mehdi Hasan called upon the United Nations and United Nations’ Human Rights Council (UNHRC) to urgently begin investigations by de-listing the fake NGOs created by India, using their names to malign Pakistan. He said regurgitation of false propaganda at world forums and claims by India had exposed clearly, adding now it could neither change facts nor divert attention from its state-terrorism being continued in the IIOJ&K, including its egregious violations of human rights of Kashmiri people.

He said the self-serving Indian claims on Indian Illegally Occupied Jammu and Kashmir (IIOJ&K) had no basis and logic.Chairman Pakistan-China Institute and Senator, Mushahid Hussain Syed talking to APP condemned the Indian nefarious propaganda and smearing campaign against Pakistan and demanded the UN and EU to bring India to justice for efforts to tarnish the image of Pakistan adopting an evil narrative.

To give India and other anti state elements a befitting reply, Pakistan and China had set up a ‘Rapid Response System’ so that fake news, propaganda and all challenges to CPEC could be countered jointly, he informed.

To rebut the Indian fake propaganda, the China Economic Net (CEN) and the Pakistan-China Institute (PCI) were successfully countering in collaborating with joint media awareness initiatives and briefings at all forums, he observed.