Pakistan raises Kashmir issue along with Palestine at the OIC conference
13 Dec, 2017 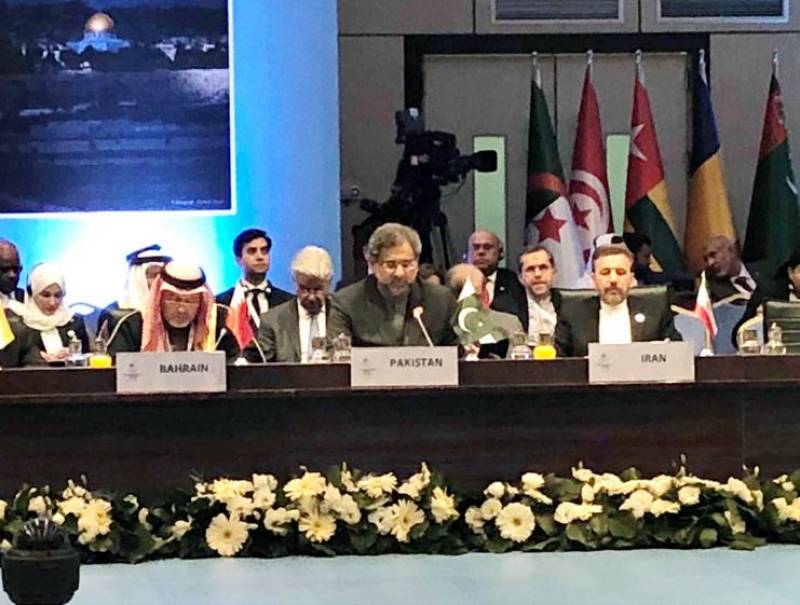 ANKARA - Prime Minister Shahid Khaqan Abbasi has urged the United States to rescind its decision to recognize Jerusalem as the so-called capital of Israel.

Addressing the Extraordinary OIC Summit on Al-Quds Al-Shari in Istanbul today (Wednesday), he asked the United States to fully comply with all applicable United Nations Security Council resolutions and recommit unequivocally to the two-state solution.

He said it is a blatant attempt to set in motion, steps to change the historic and lawful status of the Holy City.

The Prime Minister on the behalf of the people and Government of Pakistan reiterated strong condemnation of the US decision.

Shahid Khaqan Abbasi said that together with the OIC and the Islamic world, Pakistan has always demonstrated its solidarity with the Palestinian people and their legitimate aspirations for a promised homeland.

The Prime Minister said the world is witness to a similar pattern of tragedy, both in scope and scale. For seventy years, the people of Jammu and Kashmir have been subjected to illegal Indian occupation and blatant violation of their fundamental rights including their right to self-determination.

The Prime Minister said under the current scenario we should consider a number of options. Diplomatically, if the UN Security Council is unable to respond, we should garner support in the UN General Assembly.

The Prime Minister said that this Summit must unanimously reject the revisionist decision of the United States and Muslims all over the world must stand together to uphold justice, liberty and freedom.