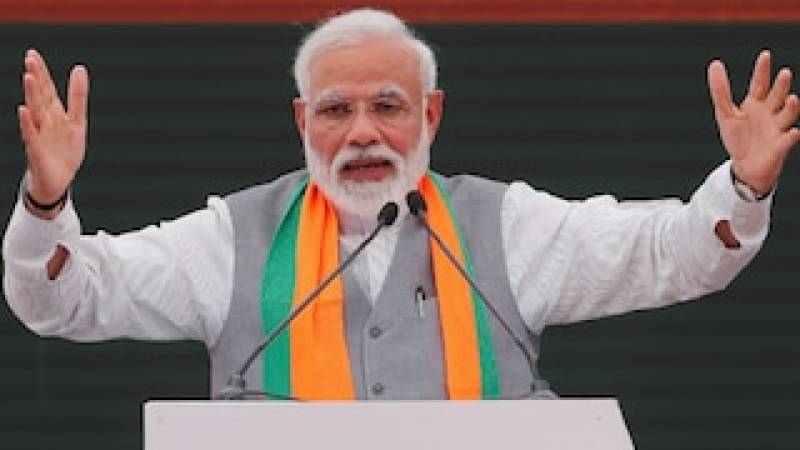 NEW DELHI - In a a scathing attack, Prime Minister Narendra Modi on Friday said the Opposition leaders are heroes in Pakistan and are being quoted there to "discredit" India.

In an apparent reference to Congress chief Rahul Gandhi, who is contesting from neighbouring Wayanad besides his traditional stronghold of Amethi, Modi asked the people of Kerala to be cautious of those who come to the State to "save themselves."

He also said the Communists and the Congress have taken the people of the state for granted.

"Beware of those people who come to Kerala not to serve you, but to save themselves. Those who are on bail for tax fraud are coming to Kerala for their own political bail out.

When such leaders or their party members come to you for vote, ask them about their performances in their constituencies. They won't have anything to say," Modi said.

He lashed out at the Congress and its "non-serious attitude" towards national security and said "they were silent when they had to act."

When the Congress was in power, the country saw many terror attacks, Modi said.

"Now our forces, successfully eliminate terrorists in their own home, the Congress and the Left question our forces.

"...Today the bare minimum they can do is to show support but they are questioning and insulting the defence

"Our opposition leaders are heroes in Pakistan where their speeches are being quoted by their leaders to discredit India," Modi said.

Addressing a massive rally, organised by the BJP-led NDA, at the beach front here, he said electing the Congress and the LDF was like giving licence to its leaders to engage in top-level corruption.

Slamming the Congress for indulging in corruption, Modi said the "Tughlaq road election scam" has been the talk of the nation.

The money that was being looted was meant to be used to provide nutrition to women and children, he said. "Imagine how shameless they are," Modi said at the Vijay Sankalp rally.