Wajid Zia will have to reveal names of 40 faceless people who participated in JIT investigation: Marriyum
13 Apr, 2018 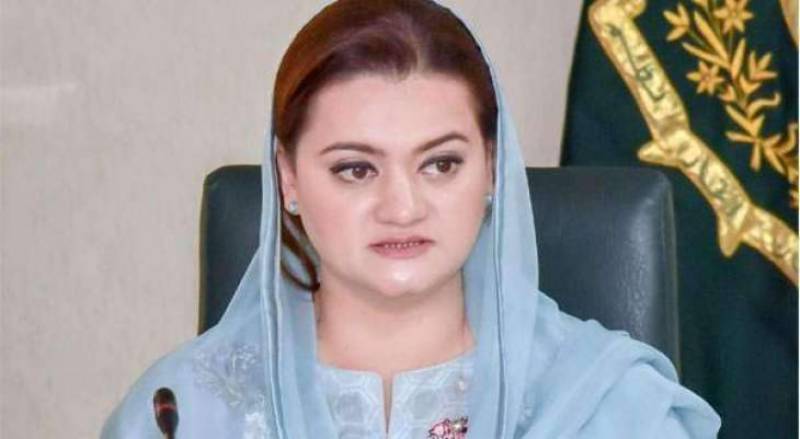 ISLAMABAD: Minister of State for Information, Broadcasting, National History and Literary Heritage Marriyum Aurangzeb while speaking at the oath taking ceremony of the office bearers of Chitral Press Club here Thursday said that Wajid Zia told the court that 40 people participated in the investigation of JIT, but refused to tell their names, the money paid to them and the terms on which they were engaged.

Marriyum said that Wajid Zia would have to narrate the story of Ali Baba and Forty Thieves to the people of Pakistan. Wajid Zia will have to reveal the name of those forty faceless and nameless people who participated in the JIT investigation . She said that the issue would not end just like that because an elected prime minister had been sent home and the people wanted to know the names of the people who participated in the investigation.

Wajid Zia, the man who headed the JIT, has unequivocally confessed in the Ehtsab court that he had no documentary evidence to prove that Nawaz Sharif received any salary from his son's company and similarly it was neither written on any document nor any witness had deposed that the Trust Deed concerning Maryam Nawaz was fake, the minister said.

She said that even in the SC judgment it was nowhere written that Maryam Nawaz should be asked to appear before the JIT, or to check the authenticity of the Trust Deed because it was fake. The minister said that none of the allegations on the basis of which Nawaz Sharif was disqualified had been established.

Marriyum said that the cross-examination in the court had unraveled the truth. She said that no question had been asked about Iqama in the court on the basis of which Nawaz Sharif was disqualified.

The minister said that Wajid Zia told the court that he had given the contract for investigation of the case to his cousin in London, but refused to divulge how much money was paid to him claiming that it was his privilege not to reveal that.

She said that it was public money and it was an official document. The minister said that even to the question about who leaked picture of Hussain Nawaz he said that it was his privilege not to tell the name of the person. She said that the journalists should convey the truth to the masses through their pens.

Marriyum said that whatever had been happening to the elected prime ministers during the last 70 years should not happen now and the elected person should be given due respect. The minister said that a case was instituted against Nawaz Sharif for having assets beyond means notwithstanding the fact that his father was the owner of a business worth billions of rupees.

She said as against that nobody took any notice or initiated any action on submission of fake documents by Imran Khan about his Bani Gala residence, missing of corruption record of Asif Zardari from NAB and running away from the country by a dictator like Pervez Musharraf.

She posed a question as to why Imran was not expelling the MPs from his party who were involved in the horsetrading during the senate elections? The minister said that Imran dubbed Zardari as a thief and dacoit but then shook hands with him and his party men voted for the Chairman and Deputy Chairman of Senate. Marriyum said that before pointing accusing finger at others he should look at his own performance. She said that his double standards and lies had been exposed before the people.

The minister said that Imarn Khan did not want the PML (N) even to present its first budget and kept waiting for the finger of the umpire, but the party successfully presented the budget every year during the last five years and God willing a people friendly budget for the next year would also be presented and passed by the present government.

The minister said that the country was going toward elections and people wanted to cast their votes on the basis of performance but Imran Khan was saying that he would not let the budget to be presented and would organize a rally against it on April 29. She said that Imran himself would remain at his residence in Bani Gala and make the people stand on the roads adding that the government would present the budget irrespective of what Imran did.

I The minister said that every mega economic project in Pakistan had the name and plaque of Nawaz Sharif and even the incumbent Prime Minister Shahid Khaqan Abbasi had acknowledged that he would be short of days if he inaugurated the project initiated by the former Prime Minister.

She emphatically said that no corruption had been unearthed in the projects worth billions of rupees. She said that whenever Nawaz Sharif had the chance to serve as the chief minister of Punjab and the prime minister of Pakistan he launched mega economic projects which had all been completed and inaugurated adding that the boxes full of documents that were collected had failed to prove any corruption or kickbacks.

Marriyum said that the generation of electricity in the country at the moment was in conformity with the demand for it, however, the government had decided to continue load-shedding in the areas where power theft was rampant. She said why should the consumers who paid their electricity bills bear the burden of those who were stealing electricity?

She said that the ministry concerned was taking appropriate steps to check this detestable practice and it was also incumbent upon the provincial government to extend full cooperation to the federal government in preventing power theft.

Referring to the work done by Shehbaz Sharif in Punjab she said that he had undertaken high quality welfare-oriented projects in the province and made it a role model for others.

The minister while taking oath from the office bearers of Chitral Press Club observed that she was having the opportunity for the second time and considered it an honour for her. She said that Chitral was one the best tourist attractions in Pakistan which was visited by thousands of tourists every year.

Marriyum said that in the past Chitral remained cut-off from rest of the country due to climatic conditions. She said that the problem had been resolved through the construction of Lowari Tunnel reviving its link with rest of the country for which the honour went to the present government.

The minister said that like the modern cameras installed in the media houses the journalists should also have the facility of insurance to compensate them in case of any loss. APP/AFP