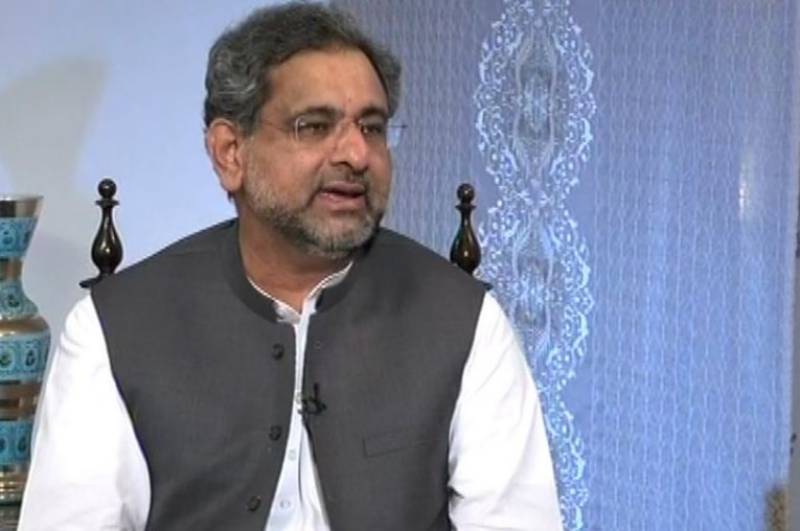 ISLAMABAD: Prime Minister Shahid Khaqan Abbasi hoped that he would be able to strike a consensus with opposition leader Syed Khursheed Shah to nominate a non-controversial person for the post of caretaker prime minister.

“I have held two meetings with Khursheed Shah. Several options are under consideration but our objective is to name a non-controversial person. I hope that we will be able to reach a consensus soon,” said Prime Minister Abbasi in an exclusive interview with Nadeem Malik, the host of SAMAA’s prim-time talk show ‘Nadeem Malik Live’ on Thursday.

“We will go to polls before July 30 as election must be held within 60 days in accordance with the law.”

To a question, Prime Minister Abbasi ruled out the possibility of a delay in the next elections due to objections filed against the recent delimitation.

“The matter of the delimitation is a routine process. It always happens. I don’t take it very seriously. The process may eventually go the Supreme Court but I hope that a decision will come on time due to constitutional requirements,” he said.

Mr Abbasi said there was no constitutional provision that could delay the elections.

About his recent meeting with Chief Justice Saqib Nisar, he said that the move was in the best interest of the country. “I call it a meeting of the mind. I placed my reservations before him. You can call it a dialogue between heads of two institutions. There is no constitutional bar for the prime minister to meet the chief justice. We deliberated on different issues.”

Abbasi said that the Senate elections had damaged the reputation of the Upper House due to the horse-trading that had taken place.

“A party that doesn’t have its MPAs in the assembly had its members elected in the Senate,” he said. “Then there was another party whose chairman says during a presser that its 14 MPAs had been bought.”

He said that Senate’s image had been damaged after the recent election.

On the question of whether Nawaz Sharif would be arrested or not, the prime minister said that he had said it before as well that justice could not be expected from the accountability court.

“Nawaz will not get justice from this NAB court,” he said.

“Yes, we will do the court’s bidding. Whether we like or dislike decisions by the court, the government will act upon it. He will be arrested.”

PM Abbasi said that such a decision would not be accepted by the people of Pakistan and would have negative effects.

On the question of Chaudhry Nisar leaving PML-N, Khaqan Abbasi said:- “I don’t think Nisar will leave the party. Where else will he go?”

“Chaudhry Nisar is one of the oldest members of the party and will not leave it now. There had been several opportunities for Nisar to leave PML-N but he didn’t do that.”APP/AFP