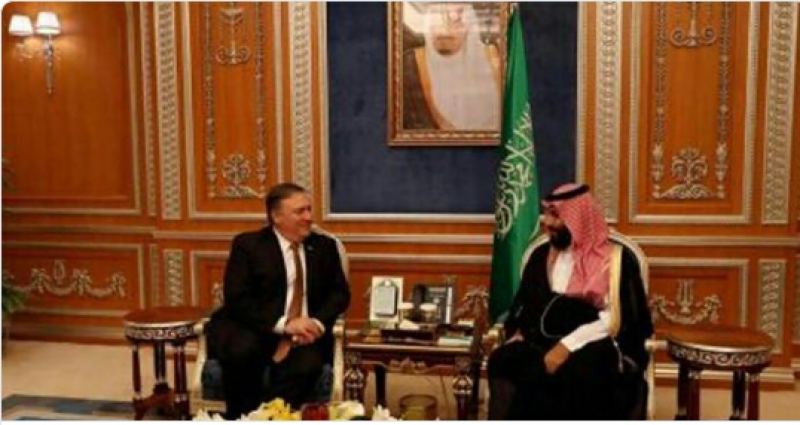 WASHINGTON - Secretary of State Mike Pompeo told Saudi Crown Prince Mohammed bin Salman on Sunday the US will hold accountable all those involved in the killing of a dissident Saudi journalist, in a telephone call that also took in the conflict in Yemen.

The killing of Jamal Khashoggi in Saudi Arabia´s consulate in Istanbul and the war in Yemen are two of the main sources of strain in the decades-old alliance between Washington and Riyadh.

"The Secretary emphasized that the United States will hold all of those involved in the killing of Jamal Khashoggi accountable, and that Saudi Arabia must do the same," State Department spokeswoman Heather Nauert said in a statement.

The top US diplomat has previously said Khashoggi´s killing "violates the norms of international law," and that the US was reviewing possible sanctions on individuals identified as having been involved.

But Pompeo and US President Donald Trump have also both emphasized America´s important commercial, strategic and national security relationships with the petro-state.

Upping the pressure on Saudi Arabia, President Recep Tayyip Erdogan said Saturday that Turkey had shared recordings related to Khashoggi´s murder with Riyadh, Washington and other capitals, without giving details of their specific contents.

After repeated denials, Saudi Arabia finally admitted the 59-year-old journalist had been murdered at its diplomatic mission in what it termed a "rogue" operation.

Reduced US role in Yemen

Ankara has been demanding, to date without success, the extradition of those involved in the killing.

Khashoggi, a columnist for the Washington Post, was critical of Prince Mohammed and the country´s intervention in Yemen, a conflict which also came up during the call, said Nauert.

Pompeo "reiterated the United States´ calls for a cessation of hostilities and for all parties to come to the table to negotiate a peaceful solution to the conflict," she said.

Pompeo has previously called for an end to the fighting in the impoverished Arab state, saying that Shiite Huthi rebels must stop missile and drone strikes from areas they control, and that the Saudi-led coalition must subsequently halt strikes in populated areas.

Pompeo´s latest remarks come just days after the announcement of the end of a controversial refueling arrangement between the US and the Saudi-led coalition carrying out strikes in Yemen -- a step that lessens American involvement in the war.