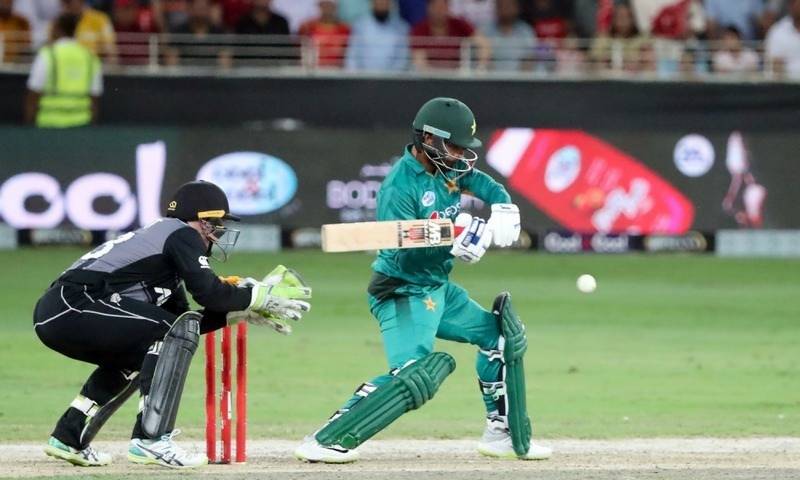 Dubai: A well-crafted 92 from Babar Azam and half-centuries from Fakhar Zaman and Haris Sohail guided Pakistan to 279-8 in the third and final one-day international against New Zealand in Dubai on Sunday.

Lockie Ferguson, though, put the brakes on with a fine display of fast bowling, taking a career best 5-45 from his 10 overs.

With the series on the line with each side having won a game, Pakistan's batting clicked from the outset after Sarfraz Ahmed won the toss and chose to bat.

Zaman and Mohammad Hafeez (19) added 64 for the first wicket before Hafeez dislodged a bail with his heel while working Ferguson to long leg, bringing Azam to the crease in the 14th over.

Zaman hit eight boundaries in his eighth one-day half century before being caught on the long-on boundary off Colin de Grandhomme for 65.

Azam then paced the innings during a third wicket stand of 108 with Sohail.

Sohail struck two sixes and six boundaries in his 59-ball 60 before he was caught in the deep off Ferguson.

Azam continued to work the gaps well, happy to pick up singles and only occasionally open his shoulders.

He faced 100 balls for his 92 but that included just four fours and one six.

He finally fell in the 49th over as he tried to reach his ninth one-day hundred, caught in the deep off Trent Boult, small consolation for the left-arm seamer whose 10 overs cost 80 runs.

New Zealand are without their skipper Kane Williamson who pulled out with a groin injury with Tom Latham leading the side.

Pakistan left out Imam-ul-Haq on precautionary grounds after he suffered a blow on his helmet in the second match on Friday but his scans were clear.