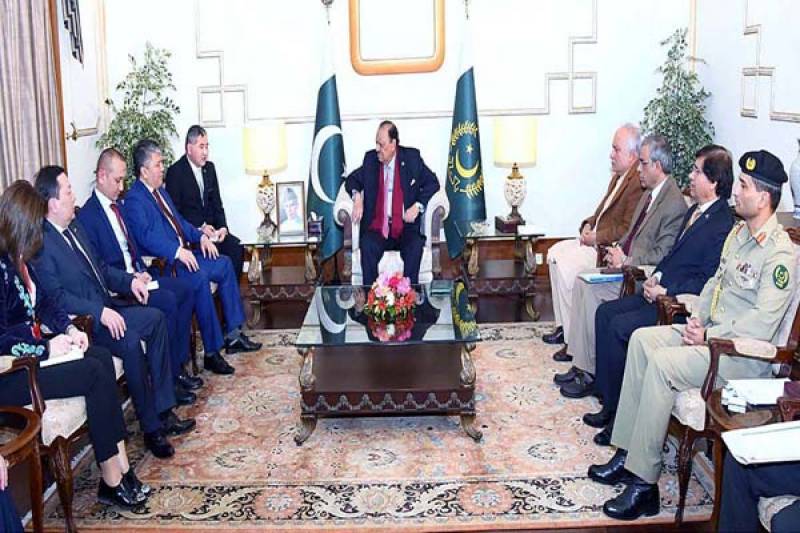 He was talking to Minister for Economy/Co-Chairman of Pakistan-Kyrgyzstan Joint Ministerial Commission (JMC), Kozhoshev Arzybek Orozbekovich, who called on him along with a delegation here at the Aiwan-e-Sadr, a press release issued from the President’s Media Office here.

The president said the government and the people of Pakistan valued partnership with Kyrgyzstan.

He stated that CASA-1000 was an important energy project between the two countries adding that this project would be helpful in meeting energy needs.

The president said Pakistan wanted to promote regional connectivity and was actively pursuing this initiative to promote relations between countries of South Asia, China and Central Asia.

The president stated that increased cooperation between Pakistan and Kyrgyzstan in the fields of transport, energy and commerce can be helpful in alleviating poverty.

He said Pakistan’s economy was improving when compared with the economies of other countries of the region, and the International Financial Institutions (IFIs) were acknowledging the country’s economic policies.

The president said Pakistan believed that Asian countries should increase their trade volume which would enhance mutual linkages and economic conditions.

He expressed optimism that Kyrgyzstan would extend full support to Pakistan for the membership of Eurasian Economic Union (EAEU).

The president called for exchange of high level visits between the two countries which will further enhance bilateral relations.