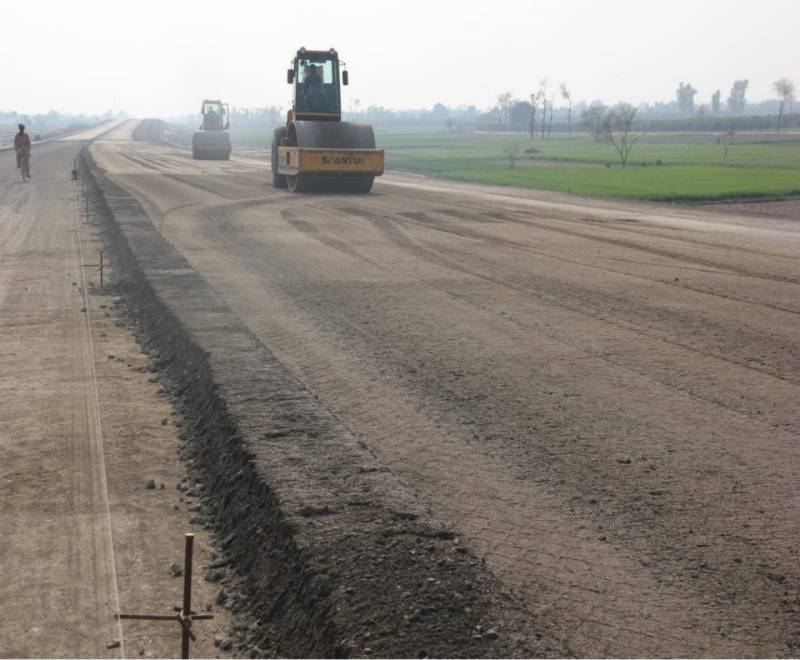 ISLAMABAD (APP): Construction of 62 kilometer(KM) Gojra-Shorkot section of Faisalabad-Multan Motorway is in full swing and the project will be completed by November next year.

An official of the National Highway Authority (NHA) told APP that as per initial estimates, the project was to cost of Rs 21 billion but due to competitive processes, this project will be completed in just Rs 17 billion.

To ensure timely completion, the Gojra-Shorkot section has been sub-divided in two construction packages.Its first package is 31 km Gojra-Jamani section which will cost Rs 8.35 billion.

The package has one interchange at Toba Tek Singh, three bridges, 51 underpasses and 162 water culverts.

The 31 km Jamani-Shorkot will cost Rs 8.83 billion and it is being constructed by M/S China Railways 1ST Group and its consultant firm is M/S Renardet SA Switzerland.

The package has two inter-changes namely Waryamwala and Shorkot, five bridges, 46 under passes and 159 water culverts.

The project is funded by the Asian Development Bank (ADB) which gave $178 million loan for construction of Gojra-Shorkot section of M-4.

This includes a grant of $91 million provided by the Department for International Development (DFID) of United Kingdom.

The Government of Pakistan will invest counterpart share of $46 million in the project, he said.

The 240 km M-4 will provide a shorter and direct connection between Southern port cities of Karachi and Gwadar with north of the country.

The M-4 will not only upgrade and decongest the country's overburdened transport infrastructure but also boost trade and travel while reducing transportation cost and time from the textile producing hub Faisalabad to Multan.

The M-4 will open up new opportunities for the residents of Faisalabad, Jhang, Toba Tek Singh and Shorkot by providing faster access to bigger markets.

The motorway will extend the already existing Motorway network southward and shorten the distance between Multan and the twin- cities of Islamabad and Rawalpindi.

He said that the M-4 project will improve the country's vital north-south road network for promotion of economic growth, job creation and regional connectivity.

It will also extend the already completed M-1, M-2 and M-3 motorways southwards and shorten the distance between Multan and twin cities of Islamabad-Rawalpindi in the north.

It is worth a mention that 58 km Faisalabad-Gojra section and the 45 km Khanewal-Multan section had already been completed and operational.

The M-4 has been divided into four segments include the 58 km Faisalabad-Gojra section, the 62 km Gojra-Shorkot section; the 64 km Shorkot-Khanewal section and the 45 km Khanewal-Multan section.