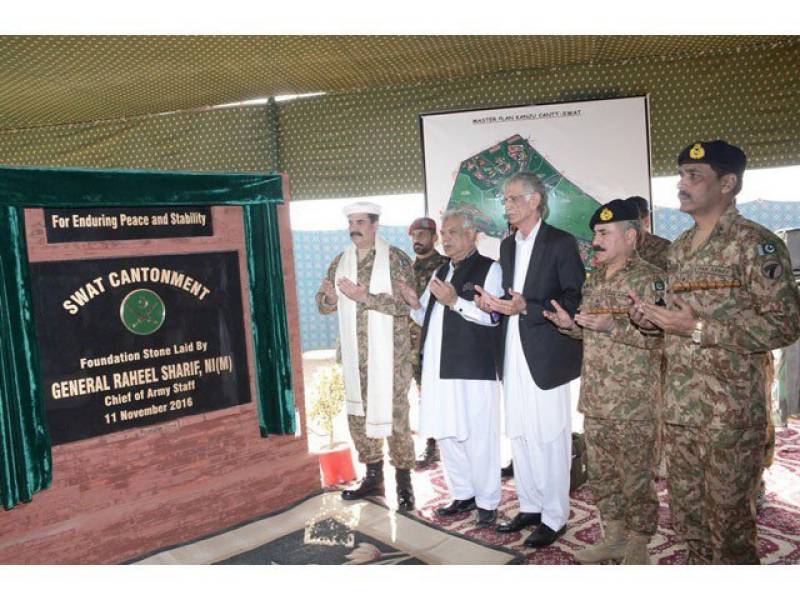 Formal approval for establishment of the cantonment was accorded earlier on September 8, 2015, on a popular demand by the local populace in view of the much needed long term security for the region.

Speaking on the occasion, the COAS paid gratitude to the people of Swat for their valiant stand against reign of terror and standing alongside the security forces to throw terrorists out of the valley forever.

Felicitating the people of Swat on this historic day, General Raheel reaffirmed army's commitment to continue playing a solid role in bringing enduring peace and security of Swat.

Establishment of cantonment in Swat will act as a deterrent for terrorists, boost the confidence of all law enforcement agencies and help bring permanent sense of security with readily available force to counter any threat to peace in the area.

The newly established cantonment will also contribute to local socio-economic development for the area.

The COAS said that development of FATA and Malakand is a priority task being executed as a well considered strategy.

Pakistan Army has undertaken over 700 mega and minor projects so far in social sector in the areas where operations were carried out.

These projects are aimed at improving the quality of life of locals and address the problem of militancy on long-term basis. The whole world acknowledges Pakistan Army for uniquely completing the entire cycle of fighting terrorism from operations to reconstruction and resettling the displaced people back in the area, the COAS said.

He appreciated the continued support of locals in combating terrorism and acknowledged their sacrifices in war against terrorism, which became critical for the success.

Chief Minister, Governor KPK and local elders of the area thanked the COAS and Pakistan Army for establishment of cantonment with all its concomitant fringe benefits for the people of Swat.

Appreciating the quality of hospital and facilities, he along with locals and hospital staff, thanked the UAE and its leadership for their contribution for socio-economic development of the area.