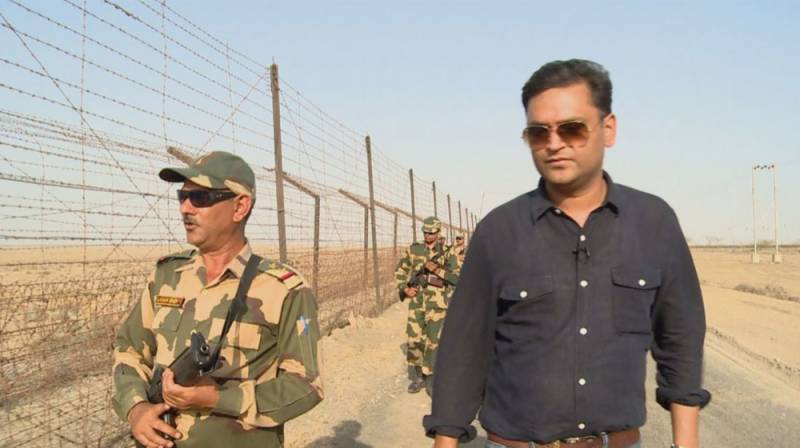 ISLAMABAD - Indian army officers (retired or in-service) and media persons don’t shy away from giving war rhetoric and hyperbolic statements against Pakistan on live TV. Retired major, Gaurav Arya’s comments regarding bloodshed of Pakistan army soldiers in Balochistan was just another example of that.

Gaurav, who retired in 1999 only after six years of service, is now a self-proclaimed defense analyst on war-hysteric Indian media. He is also working as a consulting editor for Republic TV and a host for one of their shows.

On weekend, Arya appeared on a live televised debate hosted by Arnab Goswami as a guest speaker and said:

Now you will see how the blood of their [Pakistani] soldiers will be shed in Balochistan.

He continued by ranting that, “Hum inkey hawaa nikaal dengay, hawaa [You just watch what we do with them…just watch].”

During the live television show, he claimed to have contact details of all Baloch leaders.

Bugti, Marri, Mengal…you name it… I will send it to you with their locations.

He went on to blame Pakistan for an uprise in the resistance in Kashmir and said that India will make Pakistan pay tenfold for its actions in Kashmir.

Just the way it goes, Goswami and Arya continually interrupted Pakistani defense expert, Qamar Cheema, and never gave him a chance to put forward a counter-argument.

Cheema, however, appeared in Arya’s show the next day and quipped:

Gaurav sahab, you have become quite the hit in Pakistan after your recent comments.

We started taking what you said seriously the day self-confessed Indian spy Kulbhushan Jadhav was arrested and the subsequent unearthing of the Research and Analysis Wing’s network in the province.

Jadhav is a convicted spy who confessed his involvement in financing terrorism in Balochistan. He was an active commander in the Indian navy at the time of his arrest in Balochistan. Befitting Reply

There was a strong and befitting response from the Pakistani side led by former interior minister of Balochistan, Sarfraz Bugti.

Bugti uploaded a video from the show on Twitter and said:

Dear @majorgauravarya, all your Bugtis, Marris & Mengals contacts have scurried from #Balochistan & your payroll information is outdated. Since your retirement, Balochistan has changed a lot.

He said that Arya was a mouthpiece of Arnab Goswami who is speaking desperately against Pakistan to get himself a better job.