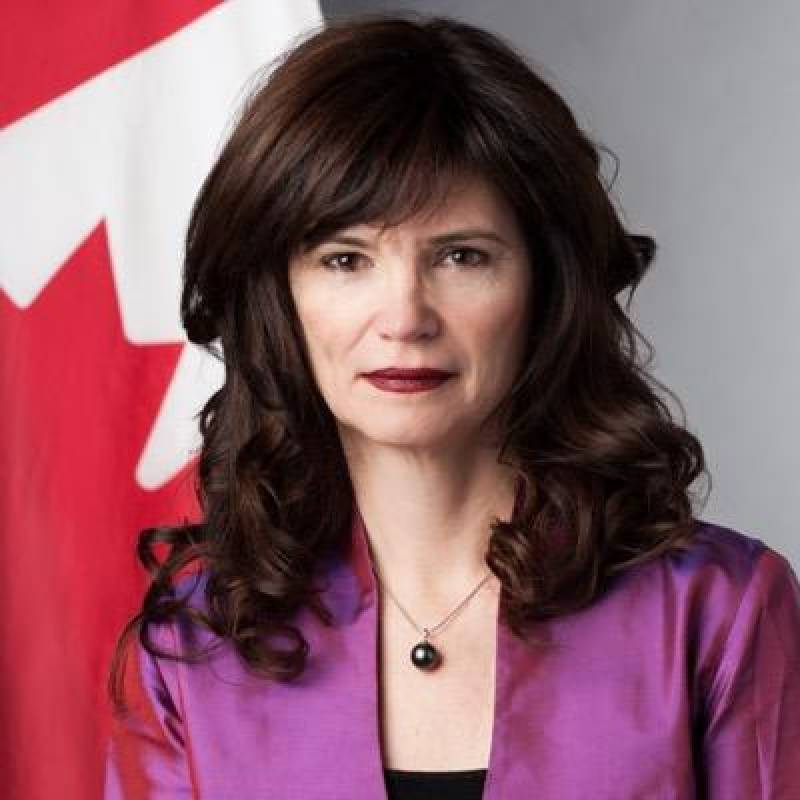 All the countries in the region should make joint efforts for peace and progress in Afghanistan, says outgoing Canadian High Commissioner, Heather Cruden, also emphasizing that eradication of polio and women empowerment were the development priorities for her country in Pakistan.

Ms. Heather Cruden stated this in an exclusive talk with an APP correspondent before her return home last week after a three-year ambassadorial in Islamabad.

She said that for the first time in the history of Pakistan-Canada relationship, her country had doubled the trade with Pakistan exceeding it up to $ 1 billion because of the incumbent government's policies.

She appreciated the efforts of Pakistan's prime minister, Muhammad Nawaz Sharif for heavily investing in infrastructure and energy sector.

Cruden gave a message for the people of Pakistan saying "believe in yourself, in your resources, but also look at the long term challenges because they are there and to me they are pretty scary" adding that Pakistan was facing many issues and challenges and Canada would continue providing assistance in future.

Terming her Pakistani experience "Incredible" Cruden said, although Canada's development priorities in Pakistan shift from time to time,yet at present, polio, women's economic empowerment and governance through women's participation in political process and electoral reforms are the main priorities.

"We just made an announcement of additional 40 million $ contribution for polio eradication in Pakistan by 2018". She was of the view that state of the human rights in Pakistan particularly women's rights is inadequate. Honor killing, early marriages and such things have huge economic and social cost.

Talking about governance in Pakistan, Cruden said that electoral reforms were recommended to the government after the last elections in 2013, expecting that soon the reforms will be passed by the Parliament.

About the new dimensions of Economic cooperation between Canada and Pakistan, the high commissioner said, although Pakistan has done enough to improve the security situation however more is needed to convince Canadian business community to invest heavily in Pakistan. "When I talk to Canadian companies about investing in Pakistan, they still cite two major issues; one is Security and the other is corruption, these things need to be tightened up little bit to give investors the confidence.

Canada is very away from Pakistan and if you travel all the way here to invest, you need to have certain confidence in the environment".

To a question the high commissioner said that people to people contact makes a big difference and help improve the relationship of countries. She said, Canada is an Education destination where world's best universities are providing quality education.

Apart from education, there are many other programs and ways to foster a people to people link.

She said, this region is one of the least economically integrated in the world and that has major implications for every single country in this part of sub region. "You might have dispute with another country but the same time you should be able to conduct economic activity. You shouldn't let those disputes which may be very serious, get in the way of growth of your country, it's purely self-interest and that has also an impact on regional peace and security".

Talking about the role of Pakistani media, the High Commissioner said that Pakistani media is incredibly vibrant and that's a good sign, but they also need to be responsible in the reporting.

She said, media shapes public opinion and she believes that media can help raise awareness on things that are detrimental to Pakistan's long term growth and prosperity. "Journalists in Pakistan are under threat" she said, adding It's really important for journalists to be independent and actually do in-depth research and studies on stories they are working on.

She stressed on change in legislation to control the incidents like honor killing.

She expressed pleasure over the announcement made by the Prime Minister of Pakistan Nawaz Sharif to bring change in the existing legislation regarding women's rights. "The Prime Minster said that, there is no honor in honor killing".

She said that one of the major challenges Pakistan is facing right now is increase in population growth. According to cruden, Pakistan's population will be doubled by 2050. "if the population doubles I think you are going to see increased fundamentalism and radicalization particularly if people don't have opportunities" she said adding that Pakistan is not proficient to manage the population of 200 million people.

Citing her farewell meeting with the Chief Minister Sindh Syed Qaim Ali Shahlast week, the High Commissioner said that the government of Sindh has been asked to take more initiatives for the improvement of quality of education in the province as well as teacher capacity building of teachers with the help of allocated funds.

The government of Canada had written off the loan of 137 million $ to Pakistan asking the government to utilize this loan in education sector as well as capacity building of teachers.