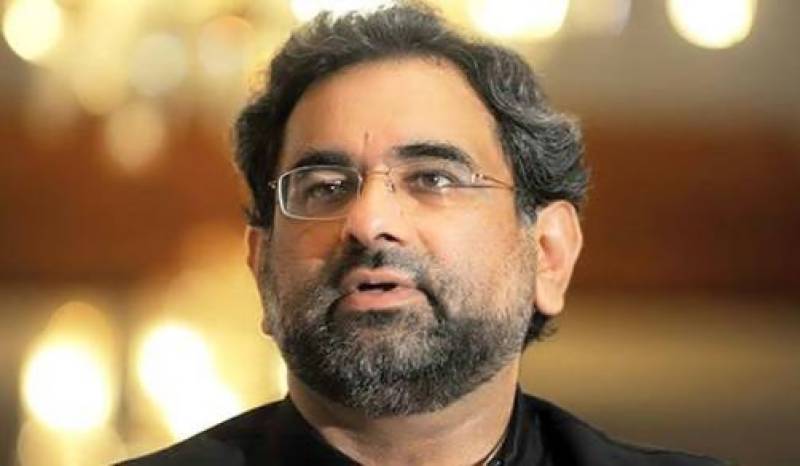 ISLAMABAD - Prime Minister Shahid Khaqan Abbasi Wednesday revealed that the PML-N was not supportive of Sardar Sanaullah Zehri’s decision to resign as chief minister of Balochistan. “MPAs told us about the pressure of intelligence agencies on them,” he added.

In an interview with Captial TV, the PM said he had asked the interior minister on whose orders FC personnel were deployed at the assembly.

Responding to a question about no-trust move against former Balochistan chief minister, Abbasi said he expected the members of the provincial assembly that had tabled the motion not to create unrest in the province and play their role for strengthening of the democratic system.

He said he had visited the province thrice in the past but no one had expressed their grievances against the former chief minister. He said now it was members of provincial assembly’s responsibility to take the democratic process forward, adding he had directed the interior minister to probe the pressure that was exerted on the elected members after some members had raised their voices.

However, he maintained that such moves were not good for the democratic system. Throughout his political career, Abassi said he had witnessed such things which could only harm democracy.

He said the central leadership of the PML-N had not endorsed the no-trust move, but the former chief minister considered it appropriate to step down. About nomination of new member to head the provincial government, he said it was up to the assembly members, whether they would work for democracy or create unrest.

Abbasi called upon all parties to demonstrate their sincerity to Pakistan by adhering to the democratic system as holding of sit-ins and sowing seeds of unrest in the society would only undermine the country.

Abbasi said 2018 was the election year and all the parties joining hands in All Parties Conference (APC) of PAT should concentrate on the next elections to be held in July.

Leadership in the political parties should demonstrate with their acts and character that they were sincere with the country as sit-ins were no solution to the issues. But from their attitude, he said, it appeared that the PML-N was the sole political party striving to ensure holding of general elections on time and regretted that other parties in the APC were not serious.

He said he was at a total loss what kind of objectives they wanted to achieve with such APC and holding of dharnas. Instead, they should go to public and tell them what they had delivered in the provinces where they were at the helm of affairs, he said. He said it was his decision that ended the dharna as it was causing unbearable public sufferings.

About Model Town incident, he said PAT objectives were to create unrest and anarchy in the country while ignoring the basic facts. If they had any case, they should take them to courts which were all functional, he said, regretting unfortunately, facts over the issue were not accepted as the parties wanted politics on the dead people.

He categorically stated that the government would complete its term so that the democratic system could move forward. There were speculations about conspiracies during the no-confidence motion in Balochistan, but the issue of concern was whether it would serve the nation, country and democracy, he added.

The prime minister said whenever the democratic system was suppressed; it had damaged the country and cited Musharraf’s steps towards Balochistan.

He said the JUI-F was PML-N’s allied party in the parliament, but was on the opposition benches in the province. He dismissed linking of JUI-F support to Fata reforms issue by saying the government wanted to resolve it with complete consensus by taking all the stakeholders on board.

He said FATA was being run on the centuries-old administrative system which required to be replaced with consensus and informed that it would stand resolved soon.

About Nawaz Sharif’s visit to Saudi Arabia, he said it was his private visit and rejected speculations making rounds in the media. He said he did not endorse such standard of politics as Nawaz had close ties with the Saudi Royal Family.

He said Nawaz is the PML-N leader and president of country’s largest party. They had been in the business of politics and struggling for the democratic system when others were sitting in the lap of martial law regime.

He said there were no two opinions about Nawaz’s view over Panama verdict which affected the country’s economy. The unrest was created in the country by staging sit-ins and filing of frivolous petitions in the courts. Whatever Nawaz had said, he did it as a responsible man, he added. Abbasi said the people should recall history. “Who did NRO! On the other hand, Musharraf took a decision on a single telephone call which put the country in turmoil for a long time,” he added. - APP