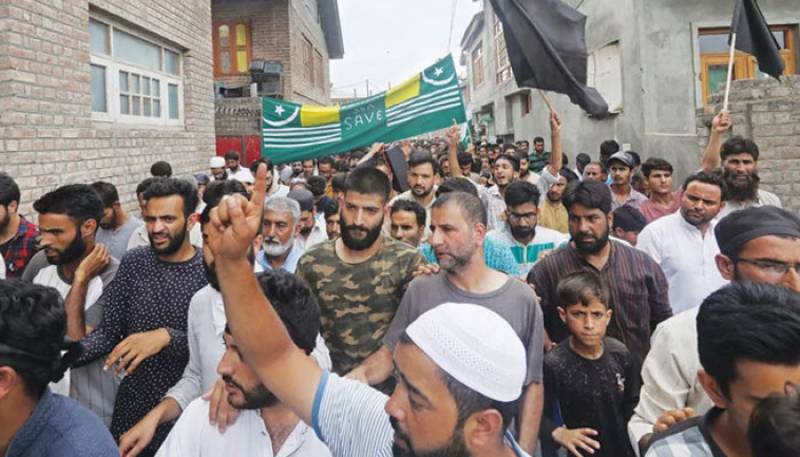 LONDON: Scores of people were martyred and injured when Indian troops and police used brute force against thousands of protesters in Srinagar, the Kashmir Media Service reported on Saturday.

Defying a stringent curfew, thousands of people including women, children and elderly persons gathered in the Soura area of Srinagar and protested against New Delhi’s action of abrogating the special status of the occupied territory.

A police officer confirmed that there were around 10,000 people at the protest in Soura. The protesters raised high-pitched slogans like “We want freedom”, “Go India go back” and “Indian Constitution unacceptable”.

Indian troops and police pushed back the demonstrators at Aiwa Bridge by firing bullets, pellets and teargas shells resulting in injuries to many people. Some women and children even jumped into the river when the police used teargas and pellets against the protesters at the Aiwa bridge.

Moreover, the BBC correspondent, Geeta Pandey, who travelled for two days around occupied Kashmir, has painted a grim picture during her visit. She wrote that Khanyar is the heart of Srinagar city but to get there, they passed through half a dozen road blocks

She said, “As we come across yet another barricade, I get out of my car to take some photos. A few men emerge from a laneway to complain about living under what to many feels like a siege. “This is extreme thuggery on the authorities’ part,” says an elderly member of the group.”

A police officer, who requested anonymity since he is not authorised to speak to the media, said that political detentions in the wake of the Modi government’s decision to revoke Kashmir’s special rights were continuing. “Over 500 people are now arrested since Sunday,” he said, including former chief ministers, ministers, lawmakers and leaders and workers from political parties and separatist groups.

On the other hand, Pakistan has downgraded diplomatic ties with India and suspended trade in anger at its latest move.

While the communication blackout in the occupied Kashmir territory is continued on the 6th consecutive day on Saturday, as the authorities have kept the internet and telephone links snapped and imposed strict restrictions on media.

According to Kashmir Media Service, the Indian government had snapped television, telephone and internet links to prevent demonstrations against its decision of revoking Article 370 of the Indian Constitution that granted special status to Jammu and Kashmir.

India had revoked Article 370 on Monday. Before that, the occupation authorities had clamped an unprecedented communications blackout on the territory and arrested many political leaders.

Meanwhile, the Indian authorities continue to clamp curfew and other restrictions across occupied Kashmir by converting it into a military garrison and a big concentration camp by deploying Indian troops and police personnel in every nook and corner of the territory.

With Internet services and telephone lines snapped across occupied Kashmir, there is no contact of the external world with the residents of the territory.

Local newspaper even failed to update their online editions since the night of August 04. Majority of newspapers could also not be printed during all these days due to curfew and other restrictions.

Almost all Hurriyat leaders, including Syed Ali Gilani and Mirwaiz Umar Farooq, have been put under house arrest or in jails.

Seventy of the arrested Hurriyat leaders and activists have been shifted from Srinagar to a jail in Agra city of the Indian state of Uttar Pradesh.

Mian Abdul Qayoom, President of the High Court Bar Association, and Mubin Shah, an office-bearer of Kashmir Chamber of Commerce are among those shifted outside the Kashmir valley.

Over 560 political leaders and workers including even pro-India politicians like Farooq Abdullah, Omar Abdullah, Mehbooba Mufti, Engineer Abdur Rasheed and Sajjad Lone, have been detained.

Due to severe blockade, the people of the Kashmir valley are facing severe shortage of essential commodities including baby food and life-saving medicines.

Meanwhile, students belonging to Indian Held (IHK) on Saturday staged a protest demonstration in New Delhi against the scrapping of Article 370 and asked the Indian authorities to lift the restrictions imposed on the held territory.

According to Kashmir Media Service (KMS), the protesters carried placards inscribed with and covered their mouths with black ribbons during protest held at Jantar Mantar in New Delhi.

Dozens of students from Delhi University, Jamia Millia Islamia, Jawaharlal Nehru University (JNU) and other educational institutions in New Delhi as well as professionals took part in the protest.

The protesters also demanded ensuring safety of students and professionals from the territory putting up in New Delhi and other Indian cities.

While, Kashmiri Hurriyat leader Yasin Malik's wife Meshal Malik Saturday said the Indian government was dragging the Kashmir issue toward a nuclear war with its neighbouring country and the United Nations Security Council should immediately take action against the Indian aggression.

Talking to a private news channel, she said Kashmiris had been deprived of basic needs due to curfew while many of them were critically ill and could not reach hospitals. She said that during the ongoing protest in Srinagar, the Indian troops opened fire on the protestors and medical treatment was not provided to the injured.

In the meanwhile, hundreds of Pakistanis and Kashmiris staged a protest in Birmingham against the abrogation of special status of Indian Held Kashmir (IHK) on Saturday.

The protest demonstration was organised by Tehreek-e-Kashmir (TeK) United Kingdom (UK). As per details, besides others ladies, children and even people with disabilities participated in the anti-India protest in front of Indian Consulate Birmingham. Protesters were shouting anti-India and pro-freedom slogans, reported foreign media.

On the occasion while addressing the protesters TeK UK President Raja Fahim Kayani said that British people will not rest until Kashmir is liberated and genocide perpetrators are punished. Hundreds of thousands of people have been killed over recent decades in a ‘dirty war’ waged by Hindutva forces to quell legitimate self-determination movement in IOK, he said.

Kayani further said that by doing this, Indian government has officially announced that Kashmir is no longer a disputed territory and will be merged with India. This will mean an end to the 70 years of struggle for the right of self-determination by the Kashmiri people (which is backed by UN Security Council resolutions).

Meanwhile, the Muslim Council of Britain on Saturday urged UK government to demand a halt to the inflammatory actions by India as they continue to lay siege on Kashmir and curtail further the rights of its people, says a press release.

Harun Khan, Secretary General of the Muslim Council of Britain said: “As a member of the UN Security Council, with a stated desire to uphold the rules-based international system, it is imperative that our government make its voice heard. British Muslims, many of whom have family ties to the region, expect our government to uphold our values, the rule of law and human rights.

“We echo the calls of British Members of Parliament calling for action on the matter. We do not want to see yet another senseless conflict over Kashmir, which will have repercussions elsewhere. We urge all parties to play their part in pursuing peace. The UK has a historic role and duty to press for peace in Kashmir," the press release added.