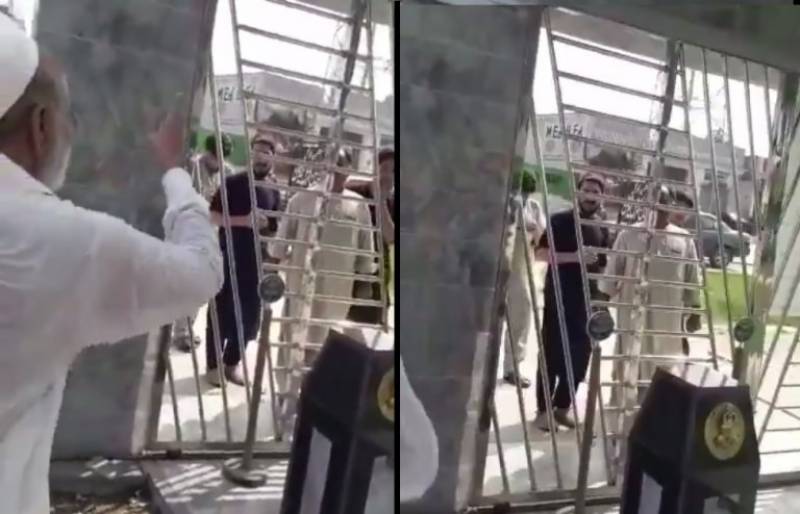 He was barred from entering the mausoleum of Capt Karnal Sher Khan Shaheed on Saturday in Swabi district’s Karnal Sher Kallay.

Capt Karnal Sher Khan, a martyred who died while fighting the Indians in the Kargil sector of disputed Kashmir region in 1999, was awarded the highest military honour — Nishan-e-Haider — for his bravery during the Kargil war.

Pashteen, who is in Swabi for PTM’s public meetings, visited the mausoleum of Captain Karnal Sher Khan along with his colleagues. However, Karnal Sher Khan’s elder brother Anwar Sher Khan locked the main gate and refused to allow Pashteen’s convoy in.

In the video footage which is making rounds on social media, Khan can be heard saying, “I know you. I have visited your place [in Waziristan]. You haven’t come here to pay tribute to Karnal Sher’s grave.”

“I have seen many videos on Facebook. Enough is enough,” Khan tells Pashteen while referring to his speeches against the state institutions, particularly the army.

Khan, while talking to media, said he refused to allow Pashteen and his colleagues to enter the mausoleum in a bid to “honour the armed forces”.

He said his brother had hoisted the national flag 18,400 feet above sea level at Kargil and earned Nishan-e-Haider and respect of the nation. “I will never tolerate anyone discrediting the national flag and the armed forces,” added.