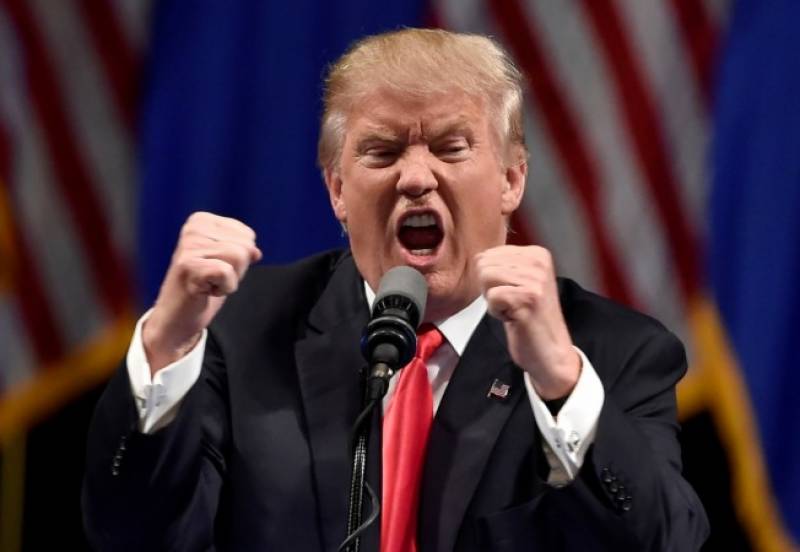 WASHINGTON (APP) - Republican candidate Donald Trump roiled the US presidential campaign once again, with the jaw-dropping assertion Wednesday that Hillary Clinton and President Barack Obama "founded" the IS group.

"He is the founder of ISIS," Trump said, using a term for IS.

"And I would say, the co-founder would be 'Crooked Hillary Clinton'," Trump shouted, over cheers and applause from the crowd.

It was the latest disquieting utterance from the bombastic billionaire, who just one day earlier made comments interpreted by many as inviting gun violence against Clinton, the Democrats' presidential nominee.

Trump appeared to suggest on Tuesday, possibly in jest, that Clinton or her Supreme Court nominees could be shot, as a way of preventing her from making judicial appointments if she wins the November presidential election.

The former secretary of State on Wednesday sternly rebuked Republican

presidential rival's "casual inciting" of violence, saying he had "crossed the line."

"Yesterday we witnessed the latest in a long line of casual comments by Donald Trump that crossed the line," Clinton told a rally in Des Moines, Iowa.

"Words matter, my friends. And if you are running to be president, or you are president of the United States, words can have tremendous consequences."

Trump and his campaign had quickly sought to douse these flames, insisting the Republican flag bearer was merely urging gun rights supporters to reject her candidacy at the ballot box.

Clinton also warned of the dangers of reckless language during a presidential race.

She slammed Trump's "casual cruelty to a Gold Star family," referring to the billionaire's clash with the parents of a Muslim American soldier who was killed in action.

"His casual suggestion that more countries should have nuclear weapons, and now his casual inciting of violence," she added.

"Every single one of these incidents shows us that Donald Trump simply does not have the temperament to be president and commander in chief of the United States."

With Team Trump seeking to dig the candidate out of a deepening hole,

triggered by "the Clinton spin machine."

In an unnerving example of campaign security tensions, an animal rights activist appeared to rush the stage as Clinton spoke Wednesday, but was tackled and removed by security.

Another attention-seeker dominated cable news Wednesday afternoon when he used suction cups to scale Manhattan's Trump Tower, the Republican nominee's home and campaign headquarters, before police captured him through an open window.

Clinton meanwhile launched an open appeal Wednesday to independents and Republicans repulsed by Trump over his string of controversial statements.

The campaign unveiled a new website,togetherforamerica.com, that lists dozens of Republicans and independents who back Clinton, including former director of national intelligence John Negroponte and former New York mayor Michael Bloomberg.

"Regardless of party, voters are increasingly concerned that Trump's tendency to bully, demean and degrade others sends the wrong message to our children," Clinton campaign chairman John Podesta said.

Trump has suffered what critics insist is a long string of missteps that have marred his campaign since he officially won the nomination last month.

He has clearly roiled the party with his unorthodox remarks, with some Republicans frustrated at his apparent inability to stay on message.

A Reuters/IPSOS poll Wednesday found that 19 percent of Republican voters want Trump to drop out of the race, while 70 percent think he should stay and 10 percent say they don't know.

Fifty prominent Republican national security experts announced in an open letter this week they would not vote for Trump, saying he "lacks the character, values and experience" to be president.

Six GOP senators and a number of House Republicans have disowned him too.

Meanwhile, Clinton was enduring a fresh round of criticism over her emails from her time as secretary of state, which have been a thorn in her side and hurt her trustworthiness among voters.

Conservative watchdog Judicial Watch released a batch of emails that raise questions about the State Department's relationship with the Clinton Foundation.

The Trump campaign seized on the latest emails to blast Clinton as "corrupt," with critics saying the messages showed the foundation sought improper preferential treatment from the department.