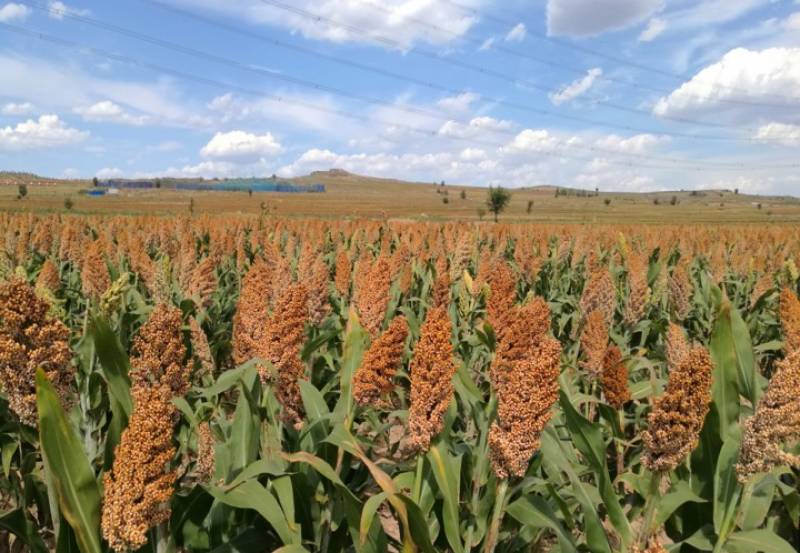 BEIJING:Sorghum is a multi-purpose crop that can play an important role in food and fodder provision. At a time when the world is facing the dual challenges of the epidemic and the food crisis, it is a win-win choice to incorporate this multi-purpose crop into the China Pakistan Economic Corridor (CPEC link) cooperation framework and add another layer of guarantee to the food security of China and Pakistan, said experts.

“In 2020-21, we have carried out planting trials of more than ten sorghum varieties in Pakistan and achieved preliminary results, of which five varieties performed better. The tannin content of domestically grown sorghum is generally around 1.3 to 1.6 percent, however, according to trials data in Pakistan, benefited from local excellent light and temperature conditions, the tannin number can climb up to 2.3 percent.

Given that the important role of tannin in food processing and industrial production, we can promote the cultivation of these varieties in Pakistan, and then ship it back to China link for further processing,”noted Yuan Guobao, Vice Chairman of the Council and Chairman of the Committee of Agricultural Experts at the NEXT Federation, in an interview with China Economic Net (CEN).

At a recently held symposium on sorghum Industry Development of China-Pakistan, Yuan Guobao not only systematically introduced the preliminary results of planting trials, but also pointed out the multiple economic benefits brought by possible large-scale planting in the future, “The superior drought, barren and saline-alkaline tolerance of Chinese hybrid sorghum varieties make it a good choice for Pakistan’s water-deficient and saline-alkali areas.”

“Secondly, Pakistan link has a vast rice-growing area. In some areas in the south near the Indian Ocean, after rice is harvested, sorghum can be planted in autumn and winter, thus the income of the local farmers can be increased by crop rotation.

If the planting area can be expanded in the future, the offshore area means that our ships will be more convenient to transport the processed sorghum and save transportation costs. Beyond doubt, it is an excellent model of cooperation with multiple economic benefits, increasing Pakistan’s foreign exchange effectively.”

According to Yuan, if large-scale planting of China’s dominant varieties can be realized in Pakistan, it is conservatively estimated that the local production will increase by about 50 percent. Even better, the high tannin content in sorghum means this kind of strong-smelling and astringent chemical has natural resistance to birds and insects. Similar to the pest control effect of garlic, it is of great benefit to the effective control of insect attack.

It is just a tip of the iceberg of opportunities for Pakistan’s sorghum industry. Yuan mentioned that China implements active quota management on the import of rice, corn and wheat. Sorghum is under non-import quota management and only needs to sign bilateral quarantine agreement to be imported. According to statistics released by General Administration of Customs of China, From January to December 2021, China’s sorghum import volume was 9.42 million tons, up 4.61 million tons compared with the same period in 2020, up 95.8 percent year on year.

The import amount was USD 3.027 billion, an increase of USD 1.871 bln compared with the same period in 2020, a year-on-year increase of 161.9 percent. Animal husbandry contributes 60 percent to Pakistan’s agricultural gross domestic product (GDP) and more than 8 million rural households in Pakistan are engaged in livestock production. Accordingly, forage sorghum can give full play to its superiority.

“Compared with another main forage-silage corn, in southern China, forage sorghum can be harvested 4-5 times a year, and the yield per unit area can reach more than 6 tons. If planted in a place with sufficient light and heat conditions like Xinjiang, its yield can exceed 10 tons.

Pakistan and Xinjiang both enjoyed sufficient sunlight and heat, so forage sorghum will bring considerable economic value,” proposed Ping Junai, Researcher of the Sorghum Research Institute of Shanxi Agricultural University, “In China, farmers directly throw the harvested forage sorghum plants into fish ponds, or process them to feed poultry such as ducks and geese, which has achieved considerable results.”

Based on the planting, experts from China and Pakistan agreed that it is crucial to further develop downstream deep processing industries and create more employment opportunities in the future. According to Dr. Shahzor Gul, Assistant Professor, Institute of Food Sciences and Technology, Sindh Agriculture University, in Pakistan, as the climatic conditions are excellent for sorghum production and emerging water shortage has necessitated the production of sorghum on wide scale, this cash crop means the most affordable option.

“Sorghum produces about 5.4 tonnes per hectare in Pakistan, more than wheat and rice, which have 3.0 and 2.2 tonnes per hectare, respectively. Meanwhile, because wheat is mainly a winter crop and sorghum is primarily a summer crop, demand for sorghum is significantly lower, and there is no direct competition,” Dr. Gul told CEN.

However, he pointed out in the meantime that sorghum yields in Pakistan are still meager due to a lack of better cultivators, an insufficient plant population, unscientific fertilizer application, weed control techniques, and water conservation procedures.

In addition, Dr. Gul also indicated that the consumption pattern of sorghum is quite traditional, and it is not available as a commercially processed food in the Pakistani market. “This is mainly due to lack of processing technologies and availability of machinery. And Sorghum has not been used in our beverage and baking food industry due to a variety of factors including lack of awareness and taste. Nowadays, there are not much sorghum grain processing plants in Pakistan. This industry holds immense potential to offer employment to hundreds of thousand people.”

“Similar views are echoed by Dr. Shahzad Sabir from Punjab Agriculture Department, Punjab and Sindh are the major sorghum producing Provinces of Pakistan contributing respectively 47 percent and 26 percent of the total,” he said. “On the other hand, in 2019, we exported USD 23, 500 in sorghum, making Pakistan the 53rd largest exporter of sorghum in the world. At the same year, sorghum was the 91st most exported product in Pakistan. Obviously, it is far from meeting expectations, especially in the face of growing global food crisis. Countless opportunities are waiting for us to discover together.”

Although imports have surged, processed products have not been included. “If agricultural joint ventures are established in countries along the Belt and Road, subsidies will be provided to processing lines, which will benefit the sorghum processing industry,” Yuan told CEN, while Dr. Shahzor Gul specifically stated,”sorghum could be processed into bakery products, puffed food, beverages and porridge and so on.

And introduction of new technologies can remove the constraints of traditional processing method, at the same time improve the nutrient content and shelf-life of products. We are blessed with wide scope for cooperation.”

At present, the blueprint of China-Pakistan sorghum cooperation has drawn a strong first stroke, “Our first step, the sorghum planting training program for Pakistani students is progressing smoothly, with the high-quality seed sources as the top priority. People engaged in agricultural science often say that seeds are the chips of agriculture, and I believe that the day when China-Pakistan sorghum cooperation bear fruit is not too far away,” Yuan concluded confidently.