UN to differentiate between terrorism and struggle of self determination: Maleeha Lodhi
10 Oct, 2016 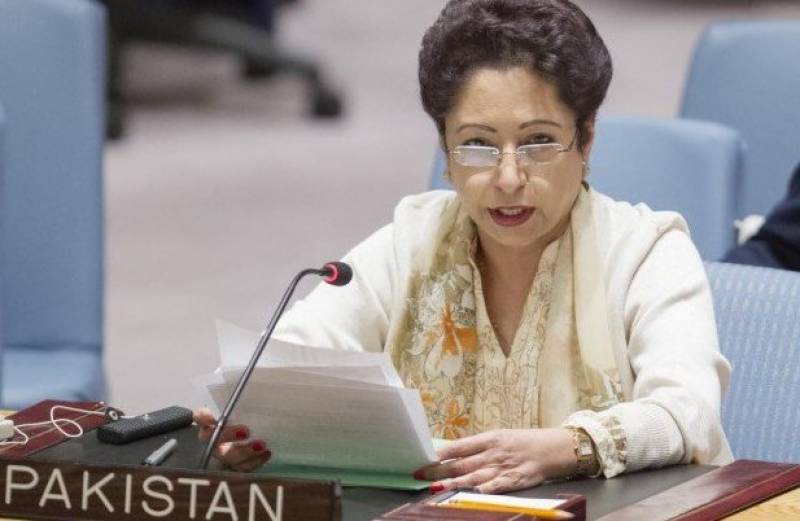 UNITED NATIONS (APP): Pakistan has called for the U.N. Counter-Terrorism Strategy to focus attention on addressing unresolved disputes, foreign occupation and denial of right of self-determination as part of measures to stamp out terrorism.

"The provisions of the draft Convention (against International Terrorism) should clearly distinguish between acts of terrorism and the legitimate struggles for self-determination of peoples living under foreign occupation," Ambassador Maleeha Lodhi, Pakistan's permanent representative to the U.N., told the UN General Assembly's Sixth Committee, which is working on the convention.

While the international community agreed that human rights violations contributed to violent extremism, she said the killings continued in Kashmir and Palestine.

"Brutalization and oppression of people struggling for their legitimate right to self-determination constitutes state terrorism," the Pakistani envoy said in a debate on "Measures to Eliminate International Terrorism".

Reaffirming Pakistan's commitment to eliminate terrorism, Ambassador Lodhi pointed out that her country had been the principal victim of much terrorism, losing more than 60,000 lives.

Operation Zarb-i-Azb, deploying 200,000 of Pakistani security forces, had made remarkable progress in cleansing the country of terrorists and would conclude only when the objective has been accomplished, she told delegates.

A national plan was being executed that focused on countering and preventing terrorism, while promoting the rule of law, and social and economic empowerment of women and youth.

The international community had created numerous counter-terrorism structures and had invested billions of dollars but terrorism continued to morph into more dangerous forms, Ambassador Lodhi said. An important factor was an unwillingness to address conditions conducive to terrorists.

Pointing out some of the gaps in the international approach, the Pakistani envoy the emphasis on rule of law to prevent terrorism and violent extremism appeared to only prevail at the national level. But despite being obvious causative factors, the international community seems to lack the will to addressing foreign intervention, foreign occupation and the continued denial of the right to self-determination of people living under foreign occupation.

"Conflicts undermine development, break down governance, create a sense of injustice and fuel violence," Ambassador Lodhi said. "Yet, in the context of preventing extremism, the international community has yet to address longstanding situations of conflict and injustice," she said, citing the situation in Kashmir and Palestine.

While there was consensus that terrorism cannot be associated with any religion, she said that extreme right political parties in the West were seeking to reap political dividends by fanning Islamophobia. "Why is no action taken against this deliberate hate mongering?"

Ambassador Lodhi stressed the need for addressing the root causes of terrorism as well as the now well-acknowledged drivers of radicalization that lie in economic and social marginalization and exclusion. "Without talking a holistic approach, we will be fighting symptoms and not the underlying causes of the disease itself."