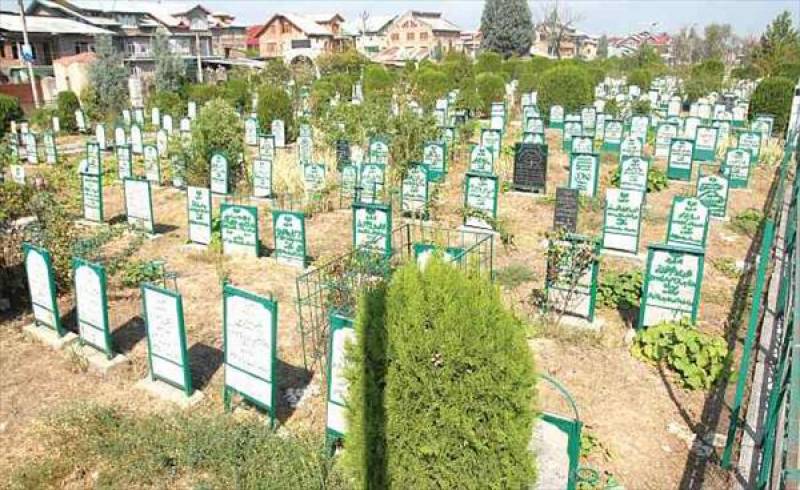 ISLAMABAD (APP): The martyrs' graveyard at Eidgah in Held Srinagar is now running out of space as the number of people being martyred by Indian forces has paced up during the last three months.

According to Kashmir Media Service,the graveyard accommodates almost all the martyred,civilians and Hurriyet leaders hailing from Srinagar.

The fresh entrants to this historic space are six people who were killed by Indian forces after the current uprising began on July 09, a day after mujahid commander Burhan Wani was killed by forces in Islamabad district.

With such a huge number of burials, the space at the graveyard is fast shrinking, say its keepers Habibullah Khan and Abdul Hameed.

"There is space for some 100 more graves left, but the land patch needs to be developed first," Khan said.

"We never know when a person gets killed. We don't see any end to killings. So in such a situation we keep arrangements well in advance," a gravedigger said, adding, sometimes weather is not favourable or any other problems do take place, so to avoid such circumstances to occur "we keep one grave always ready and reserved".

"Martyrs from Srinagar or close vicinities are preferably buried here. It was decided by then leadership to bury the martyrs at one place so that we can keep some record of those killed during Kashmir's struggle. This land became the central graveyard after Mirwai Moulv iFarooq was buried here. Even before him many top faces like Ishfaq Majeed, Ejaz Dar and others were buried here," he said.